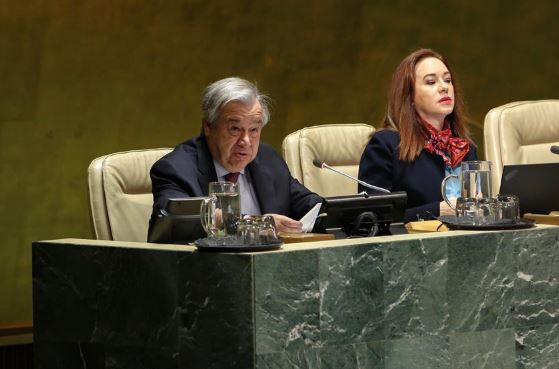 United Nations Secretary-General Antonio Guterres (L) addresses an event to commemorate the International Day for the Elimination of Racial Discrimination, at the UN headquarters in New York, March 25, 2019. (Photo: Xinhua)

In his remarks at an event to commemorate the International Day for the Elimination of Racial Discrimination, Guterres said that it is time to "renew our promise to end racism, racial discrimination, xenophobia and related intolerance, including social and ethnic discrimination, anti-Muslim hatred and anti-Semitism."

"The massacre at two mosques in New Zealand two Fridays ago is the latest tragedy rooted in such poison," he said.

The UN chief said that he was deeply alarmed by the current rise of xenophobia, racism and intolerance, fed increasingly by nationalist and populist ideologies.

When people are attacked, physically, verbally or on social media, because of their race, religion or ethnicity, all of society is diminished, said the secretary-general, adding that it is crucial for all of us to stand up and defend the principles of equality and human dignity.

Guterres said that he has asked his special adviser for the prevention of genocide to bring together the UN system to design a strategy and plan of action to combat hate speech.

The secretary-general said that the universal human rights have to be upheld and promoted. This includes supporting national legislation that promotes non-discrimination and encouraging politicians and religious leaders to speak out against intolerance, discriminatory stereotyping and hate speech.

The International Day for the Elimination of Racial Discrimination, which falls on March 21, commemorates the Sharpeville massacre in 1960, where police opened fire and killed 69 people peacefully demonstrating against apartheid in South Africa.