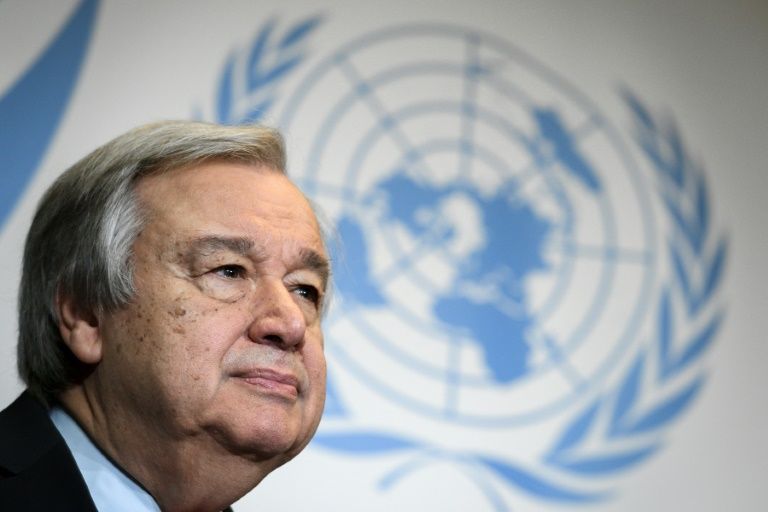 Biodiversity and ecosystems are essential for human progress and prosperity. They are central to achieving the Sustainable Development Goals and implementing the Paris Agreement on climate change, he told the UN Biodiversity Summit.

Yet, despite repeated commitments, efforts have not been sufficient to meet any of the global biodiversity targets set for 2020. Much greater ambition is needed -- not just from governments, but from all actors in society, he said.

Degradation of nature is not purely an environmental issue. It spans economics, health, social justice and human rights, he warned. "Neglecting our precious resources can exacerbate geopolitical tensions and conflicts."

Yet, too often environmental health is overlooked or downplayed. The UN Biodiversity Summit provides an opportunity to show the world that there is another way. Humanity has to change course and transform its relationship with the natural world, he said.

"By living in harmony with nature, we can avert the worst impacts of climate change and recharge biodiversity for the benefit of people and the planet," said the UN chief.

First, nature-based solutions must be embedded in COVID-19 recovery and wider development plans.

Preserving the world's biodiversity can yield the jobs and economic growth that are urgently needed today. The World Economic Forum signals that emerging business opportunities across nature could create 191 million jobs by 2030. Africa's Great Green Wall alone has created 335,000 jobs, he said.

"Nature-based solutions are also vital tools in our fight to solve the climate crisis. Forests, oceans and intact ecosystems are effective carbon sinks. Healthy wetlands mitigate flooding. We have natural solutions at our fingertips to protect us from natural disasters, job loss and economic fallout. Let us use them," said Guterres.

Second, economic systems and financial markets must account for and invest in nature.

Nature's resources still do not figure in countries' calculations of wealth. The current system is weighted toward destruction, not preservation, he said.

The Organization for Economic Cooperation and Development estimates the annual global funding needed for nature at between 300 billion and 400 billion U.S. dollars -- less than current levels of harmful subsidies for agriculture, mining and other destructive industries, Guterres noted.

Investing in nature will protect biodiversity and improve climate action, human health, and food security. And governments need to include biodiversity as a criterion in financial decision-making, he said.

Third, there is a need to secure the most ambitious policies and targets that protect biodiversity and leave no one behind.

The Convention on Biological Diversity estimates that services from ecosystems make up 50 to 90 percent of the livelihoods of poor rural and forest-dwelling households. Nature offers business opportunities to poor communities, from sustainable farming to ecotourism or subsistence fishing. All of them depend on conserving biodiversity and using it sustainably.

Most indigenous peoples, in particular, depend on healthy ecosystems that can provide the economic and financial services they need to preserve their cultures and livelihoods, he said.

Guterres said humanity, instead of waging war on nature, needs to rebuild its relationship with it.

More than 60 percent of the world's coral reefs are endangered due to overfishing, destructive practices and climate change. Wildlife populations are plummeting because of overconsumption, human population growth and intensive agriculture. And the rate of species extinction is accelerating, with some 1 million species currently threatened or endangered, he said.

"Deforestation, climate change and the conversion of wilderness for human food production are destroying Earth's web of life. We are part of that fragile web, and we need it to be healthy so we and future generations may thrive."

One consequence of the imbalance with nature is the emergence of deadly diseases such as HIV/AIDS, Ebola, and now COVID-19, against which mankind has little or no defense. Sixty percent of all known diseases and 75 percent of new infectious diseases are zoonotic, passing from animals to humans, demonstrating the intimate interconnection between the health of our planet and our own, he said.

Nations have failed with regard to biodiversity in the last decade, he said. But nature is resilient and it can recover if humankind eases its relentless assault. The UN Biodiversity Summit presents a unique opportunity for world leaders to make the decisions that will shape the shared future of humankind, he said.

Guterres stressed the need to secure an ambitious post-2020 biodiversity framework, one that will help achieve the Sustainable Development Goals; one that sets out concrete and measurable targets and includes means of implementation, particularly finance and monitoring mechanisms; one that mobilizes a full and effective partnership across state and societies, with businesses, youth, women, indigenous peoples and local communities.

"We need a healthy planet for our societies to thrive and our economies to rebuild," he said.