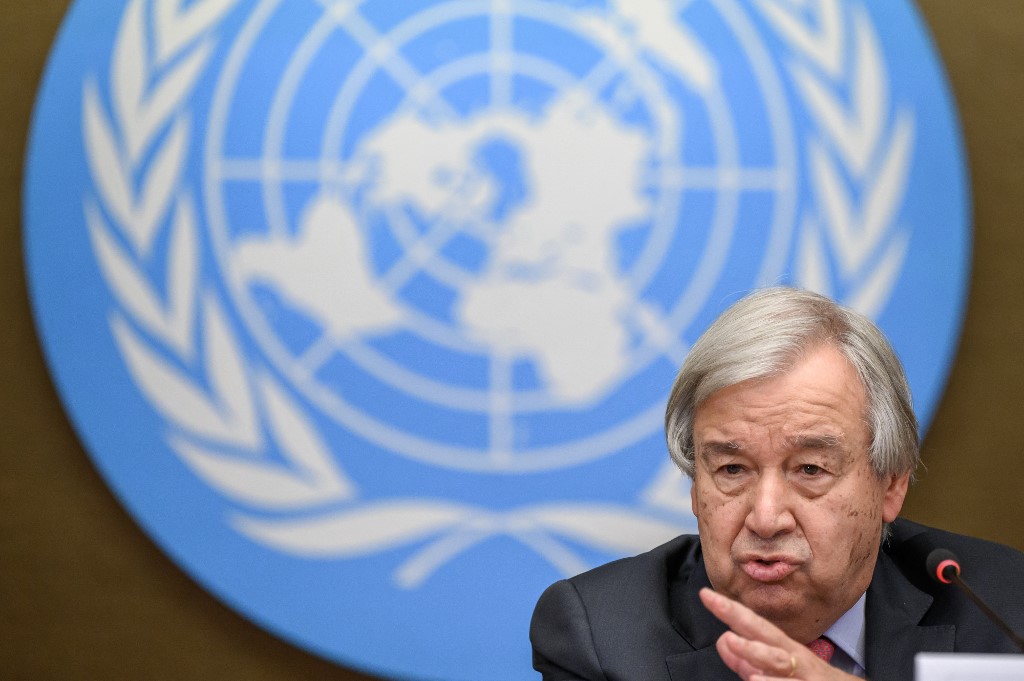 He made the plea at the launch of the UN Environment Programme's Emissions Gap Report 2021, entitled "The Heat Is On."

The report shows that with the present Nationally Determined Contributions (NDCs) and other firm commitments of countries around the world, the world is on track for a catastrophic global temperature rise of around 2.7 degrees Celsius above pre-industrial levels, he said.

"As the title of this year's report puts it: 'The heat is on.' And as the contents of the report show: the leadership we need is off. Far off."

The clock is ticking. The emissions gap is the result of a leadership gap. But leaders can still make this a turning point to a greener future instead of a tipping point to climate catastrophe, he said. "The era of half measures and hollow promises must end. The time for closing the leadership gap must begin in Glasgow."

As world leaders prepare for Glasgow, this report is another thundering wake-up call.

Unless global carbon emissions are reduced by 45 percent from 2010 levels by 2030, the Paris Agreement goal of temperature rise of 1.5 degrees will not be obtained, he said.

Scientists are clear on the facts. Now leaders need to be just as clear in their actions. They need to come to Glasgow with bold, time-bound, front-loaded plans to reach net-zero emissions, he said.

"We know that humanity's future depends on keeping global temperature increase to 1.5 degrees Celsius by 2030. And we also know that, so far, parties to the Paris Agreement are utterly failing to keep this target within reach. And the report also shows that countries are squandering a massive opportunity to invest COVID-19 fiscal and recovery resources in sustainable, cost-saving, planet-saving ways. So far, the report estimates that only about 20 percent of recovery investments will support the green economy," he said.

He asked countries to decarbonize every sector -- from power to transport, farming and forestry; to phase out coal -- by 2030 in members of the Organization for Economic Co-operation and Development, and 2040 in all others -- and to end all coal investment, public and private, national and international; to end subsidies for fossil fuels and polluting industries; to put a price on carbon, and to channel that back to creating green jobs; and to provide at least 100 billion US dollars each year to the developing world for climate finance.

He repeated his call to donors and multilateral development banks to allocate at least 50 percent of their climate support toward adaptation and resilience.

The role of Group of 20 (G20) countries is crucial as the G20 represents 80 percent of the emissions, said Guterres. "I will be joining the G20 next weekend, and I will be strongly appealing for all of them to do their maximum."

There is a principle of nationally determined, common but differentiated responsibilities according to national capabilities, which means that the leadership must come from developed countries. But the level of emissions of the emerging economies is such that these emerging economies need to go an extra mile. Only if everybody does the maximum, it will be possible to get there, he said.

The report shows that new or updated NDCs and announced pledges for 2030 have only limited impact on global emissions and the emissions gap in 2030, reducing projected 2030 emissions by only 7.5 percent, while 30 percent is needed to limit warming to 2 degrees and 55 percent is needed for 1.5 degrees.

If continued throughout this century, they would result in warming of 2.7 degrees.

The achievement of the net-zero pledges that an increasing number of countries are committing to would improve the situation, limiting warming to about 2.2 degrees by 2030. However, the 2030 commitments do not yet set G20 members on a clear path toward net-zero. Moreover, G20 members as a group do not have policies in place to achieve even the NDCs, much less net-zero, according to the report.

Inger Andersen, the executive director of the UN Environment Programme, who jointly launched the report with Guterres, called for immediate action.