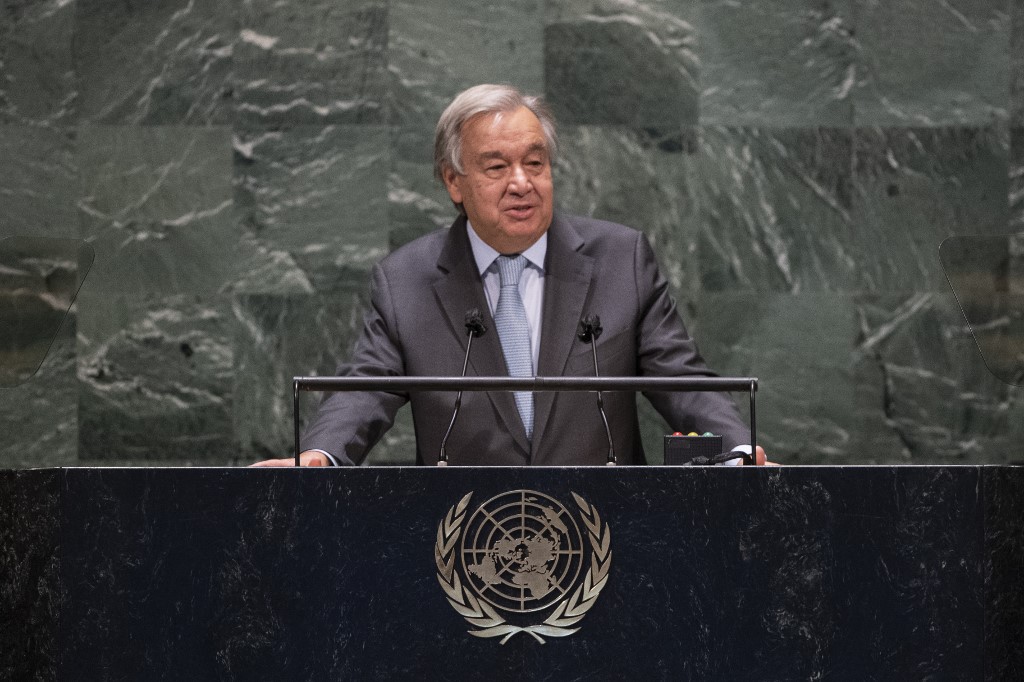 This UN handout photo shows UN Secretary-General António Guterres as he addresses the general debate of the General Assembly’s seventy-fifth session on September 22, 2020.

The COVID-19 pandemic is a full-blown crisis in itself, unfolding against a backdrop of high geopolitical tensions and other global threats in unpredictable and dangerous ways, he told a summit-level Security Council debate on "global governance after COVID-19."

"The pandemic is a clear test of international cooperation, a test we have essentially failed," Guterres said.

The virus has killed nearly 1 million people around the world, infected over 30 million, and remains largely out of control. This was the result of a lack of global preparedness, cooperation, unity and solidarity, he said.

COVID-19 is a wake-up call for even more catastrophic challenges that may arise, starting with the climate crisis, he said. "If we meet these with the same disunity and disarray we have seen this year, I fear the worst."

There is an urgent need for innovative thinking on global governance and multilateralism, so that they are fit for the 21st century, said Guterres.

He called for global governance that is resolute, coordinated, flexible, and ready to react to the full range of challenges.

The world is no longer bipolar or unipolar, and is instead moving toward multipolarity, he noted. "We experienced fragmentation and polarization without effective mechanisms of multilateral governance 100 years ago. The result was the First World War, followed by the second (World War)."

COVID-19 has illustrated beyond dispute the gaps in the multilateral system. As countries go in different directions, the virus goes in every direction, he said.

A rational and equitable approach to vaccination would reduce preventable deaths by prioritizing front-line workers and the most vulnerable. But the world has struggled to mobilize the resources needed to ensure a vaccine as a global public good, available and affordable to all, he lamented.

In a world of interconnected threats, solidarity is self-interest, he said.

He called for "a networked multilateralism" that is based on strong links and cooperation between global and regional organizations, international financial institutions and other global alliances and institutions.

Many of the cross-border challenges, from the climate crisis to rising inequality to cybercrime, involve interest groups, businesses, organizations and entire sectors that are outside traditional concepts of global governance, he said. "These challenges cannot be addressed effectively by states alone. We need to broaden our idea of global governance, to take in businesses, civil society, cities and regions, academia and young people."

International conventions are not the only way to reach binding agreements for the common good. There is a need for flexible mechanisms in which different stakeholders come together, adopt protocols and codes of conduct, define red lines and create conditions for successful cooperation which is particularly relevant in the digital world, he said.