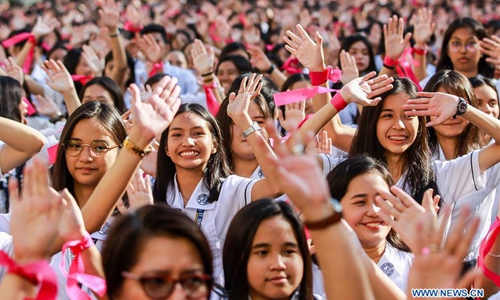 Students and teachers participate in a campaign calling for the end of violence against women and children, on the occasion of Valentine's Day in Manila, the Philippines, Feb. 14, 2020. (Xinhua/Rouelle Umali)

Recovery from the COVID-19 pandemic is a chance to chart a path to an equal future for women and men, he told the opening of the 65th session of the Commission on the Status of Women.

Guterres called on all leaders to put in place five key building blocks: realize women's equal rights fully, including by repealing discriminatory laws and enacting positive measures; ensure equal representation through special measures including quotas; advance women's economic inclusion through equal pay, targeted credit, job protection and significant investments in the care economy and social protection; enact an emergency response plan in each country to address violence against women and girls, and follow through with funding, policies, and political will; give space to the intergenerational transition that is under way by offering more support for young women.

COVID-19 response has spotlighted the great power of women's leadership. Over the past year, women leaders are among those who have kept transmission rates low and put countries on track for recovery. Women's organizations have filled crucial gaps in the provision of services and information, especially at the community level, he said.

Greater gender balance has led to better responses. Conversely, countries with less effective responses have tended to be those where strongman approaches prevail and women's rights are under assault, he said.

Yet still, women's voices remain missing from the highest levels of leadership, said the UN chief.

Women make up a mere quarter of national legislators worldwide, a third of local government members, and just one-fifth of cabinet ministers. Only 22 countries are headed by a woman head of state or government. And at current rates, parity among heads of government will not be achieved until 2150, he said. "That's right, another 130 years of men making the same kinds of decisions they have made for the past 130 years and more."

"When women are missing from decision-making, we see the world through only one perspective. We create economic models that fail to measure the productive work that occurs in the home. We create digital fora with built-in coding biases. We see decisions threatening efforts to guarantee full access to sexual and reproductive health services and rights. And we spend trillions on weapons that fail to make us safer, while neglecting the violence that one in three women globally have experienced," he explained.

In peace negotiations from 1992 to 2019, only 13 percent of negotiators, 6 percent of mediators and 6 percent of peace agreement signatories were women. Negotiations are still structured in a way that elevates and incentivizes the very people who have fuelled the violence, rather than those who are building peace, he said.

"Too often, when addressing the challenge of exclusion, it is suggested that we focus on training, capacity building, empowerment for women. But women already have the skills, the expertise and the capacity. In many countries, they are graduating from higher education at higher rates than men -- and have been for some time. What we need is not more training for women, but to train those in power on how to build inclusive institutions. We need to move beyond fixing women and instead fix our systems," the UN chief said.

Guterres also called for support for women leaders in all their diversity and abilities -- including young women, migrant women, indigenous women, women with disabilities, women of color and LGBTIQ+.