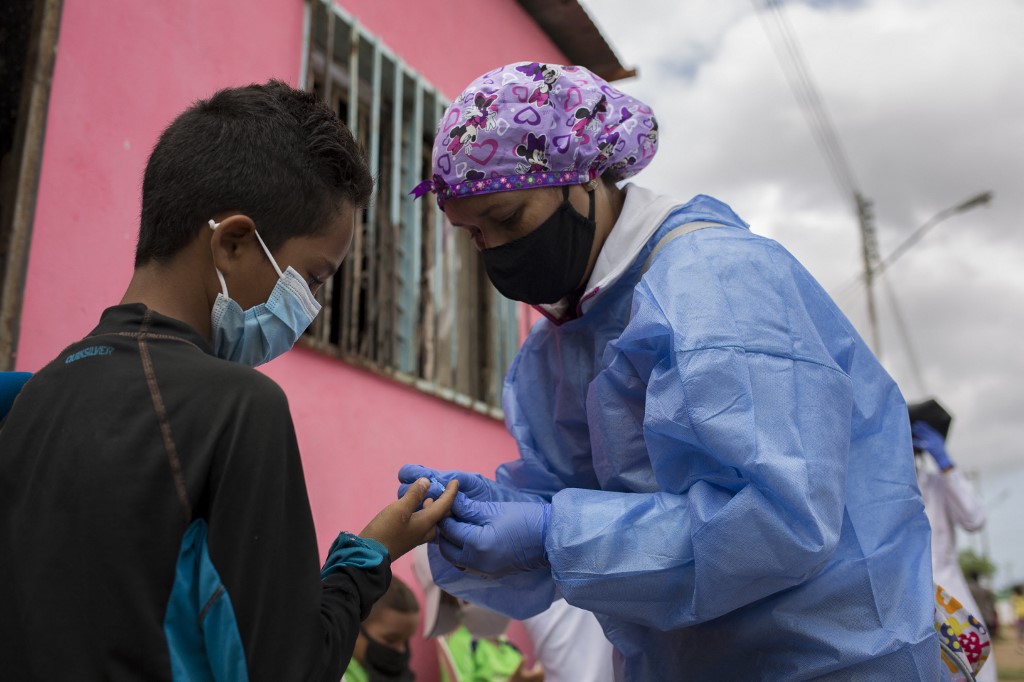 A medical volunteer of the Doctors Without Borders (MSF) organization takes a blood sample from a patient to be tested for malaria at his home in Barcelona, Anzoategui State, Venezuela, on March 16, 2021. (Photo: AFP)

"We commend all countries that have reached the ambitious target of zero malaria," said the secretary-general in his message for the World Malaria Day, which falls on April 25 annually.

"Together, they are showing the world that a malaria-free future is possible," he added.

Between 2000 and 2019, the number of countries with fewer than 100 indigenous malaria cases increased from six to 27, the top UN official cited the statistics of the World Health Organization (WHO) as showing, calling it "a strong indicator" that malaria elimination is within reach.

Despite the COVID-19 pandemic and the multiple crises it has sparked, a growing number of countries are approaching and achieving malaria elimination, the UN chief said.

Countries with zero malaria have reached the people at risk with the necessary services, from prevention to detection and treatment, regardless of citizenship or financial status, Guterres said.

"Sustained funding, surveillance systems and community engagement have been the key to success," he added.

Yet, while these achievements deserve celebrating, it is important to remember the millions around the world who continue to suffer and die from this deadly illness, the secretary-general noted.

Each year, malaria claims the lives of more than 400,000 people, mainly young children in Africa. And, every year, there are more than 200 million new cases of this fatal parasitic disease.

With robust political commitment, adequate investment and the right mix of strategies, "malaria can be defeated," said the secretary-general.

In 2019, Africa shouldered 94 percent of all malaria cases and deaths worldwide, with more than half of all cases occurring in five countries including Nigeria, 27 percent; Democratic Republic of the Congo, 12 percent; Uganda and Niger, 5 percent each; and Mozambique, 4 percent, according to WHO.

During that same period, about 3 percent of malaria cases were reported in Southeast Asia and 2 percent in the Eastern Mediterranean region.

The Americas and Western Pacific region each accounted for fewer than 1 percent of all cases.

Certification of malaria elimination is WHO's official recognition of a country's malaria-free status, which it grants when a state has proven, beyond reasonable doubt, that the chain of indigenous malaria transmission has been interrupted nationwide for at least the past three consecutive years.

Following 50 years of solid commitment by the government and people of El Salvador to end the disease, in February it became the first country in Central America to receive the distinction.

Meanwhile China, which zero registered indigenous cases in 2016 and has stayed malaria-free to date, applied last year for the WHO malaria-free certification.

World Malaria Day is an international observance commemorated every year on April 25 and recognizes global efforts to control malaria. The international day was established in May 2007 by the 60th session of the World Health Assembly, WHO's decision-making body.