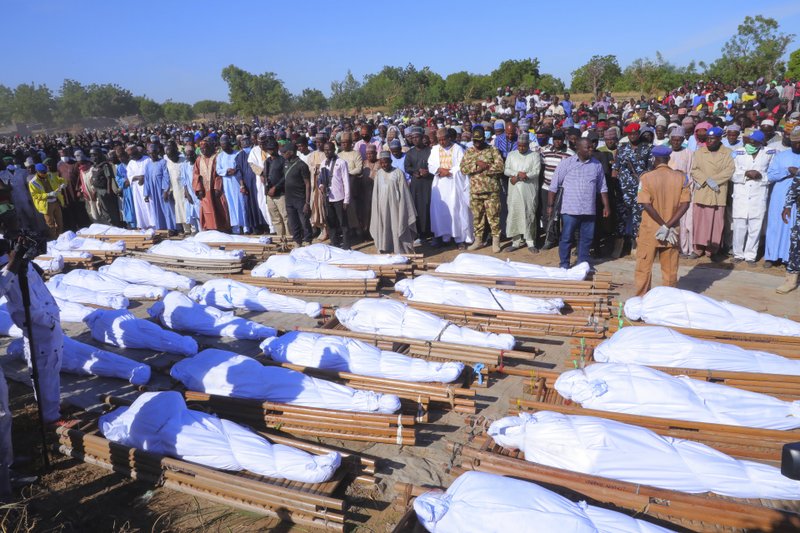 People attend a funeral for those killed by suspected Boko Haram militants in Zaabarmar, Nigeria, Sunday, Nov. 29, 2020. Nigerian officials say suspected members of the Islamic militant group Boko Haram have killed at least 40 rice farmers and fishermen while they were harvesting crops in northern Borno State. The attack was staged Saturday in a rice field in Garin Kwashebe, a Borno community known for rice farming. (Photo: AP)

Through a statement attributable to his spokesperson Stephane Dujarric, the UN chief condemned "in the strongest terms the horrific attack on rice farm workers in Koshobe village, near the Borno State capital of Maiduguri by suspected militants on Nov. 28, in which scores were reportedly killed and many others injured or abducted, including women."

The secretary-general extended his deepest condolences to the families of the deceased and to the people of Nigeria, wished a swift recovery to the injured, and called for immediate and safe returns of the abductees and those still reported missing.

"He hoped those responsible for these heinous crimes will be quickly brought to justice," said the statement.

The secretary-general reaffirmed the UN's commitment to supporting the Nigerian government in its fight against terrorism and violent extremism and in its response to pressing humanitarian needs in the northeast of the country, the statement added.

Suspected members of the Islamic militant group Boko Haram reportedly killed at least 40 rice farmers in Nigeria as they were harvesting crops in the state of Borno. The farmers were reportedly rounded up and summarily killed by armed insurgents in retaliation for a failed extortion attempt.