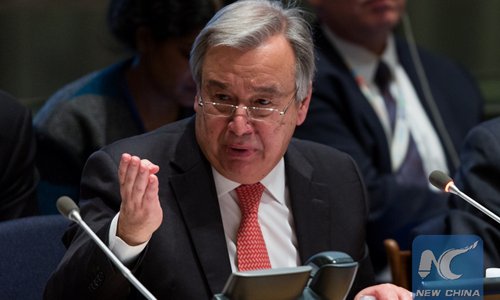 UN Secretary-General Antonio Guterres on Wednesday condemned the attack in Mopti region of Mali in which four Bangladeshi peacekeepers were killed in an improvised explosive device (IED) blast and four others seriously injured. The incident came a day after six members of the Malian armed forces also died from an IED attack in central Mali. "The Secretary-General recalls that attacks targeting United Nations peacekeepers may constitute war crimes under international law and that the perpetrators must be apprehended and prosecuted," Guterres' spokesperson Stephane Dujarric said in a statement. "These cowardly acts will not deter MINUSMA's determination to support the Malian authorities in their efforts to protect civilians and accompany the Malian people in their quest for peace and stability," the statement said. The United Nations Multidimensional Integrated Stabilization Mission in Mali (MINUSMA) was established in 2013 to support political processes and carry out security-related tasks. MINUSMA was asked to support the transitional authorities of Mali in stabilizing the country and implementing the transitional roadmap.