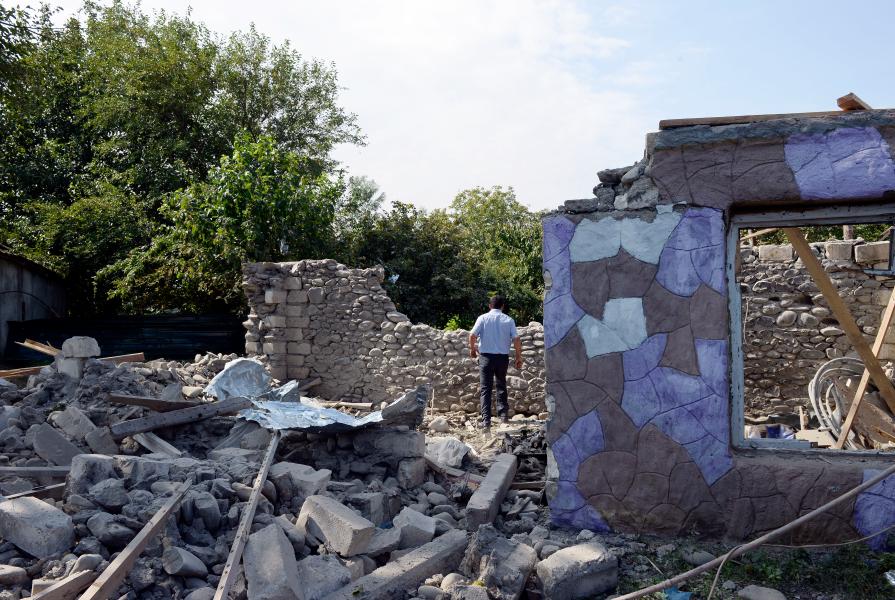 Photo taken on Sept. 29, 2020 shows a house damaged in the clashes between Armenian and Azerbaijani forces in the Tartar district bordering the Nagorno-Karabakh region. (Photo: Xinhua)

"The secretary-general takes note of the Dec. 3 joint statement on the situation in Nagorno-Karabakh by the heads of delegation of the OSCE (the Organization for Security and Cooperation in Europe ) Minsk Group Co-Chair countries," said Stephane Dujarric, spokesman for the UN chief, in a statement.

"He welcomes the continuing adherence to the ceasefire in accordance with the Nov. 9 joint statement ... and calls on all concerned to continue implementing their obligations, notably as they relate to international humanitarian law and human rights law," the statement said.

Guterres made clear that the UN "is prepared to respond to the humanitarian needs in all areas affected by the conflict, and to scale up ongoing assistance in Armenia and Azerbaijan, as required. He calls on all relevant actors to cooperate fully with the United Nations entities to ensure their unfettered access."

The UN chief further urged Armenia and Azerbaijan "to resume negotiations under the auspices of the OSCE's Minsk Group Co-Chairs to reach a lasting peaceful settlement."

"He encourages the governments and the people of Armenia and Azerbaijan to embark on a path of dialogue to foster regional peace, stability, and prosperity," the statement said.

The agreement led to the deployment of thousands of Russian peacekeepers to the enclave and border regions, after six weeks of escalating conflict over Nagorno-Karabkh, which reportedly left thousands dead and more displaced.