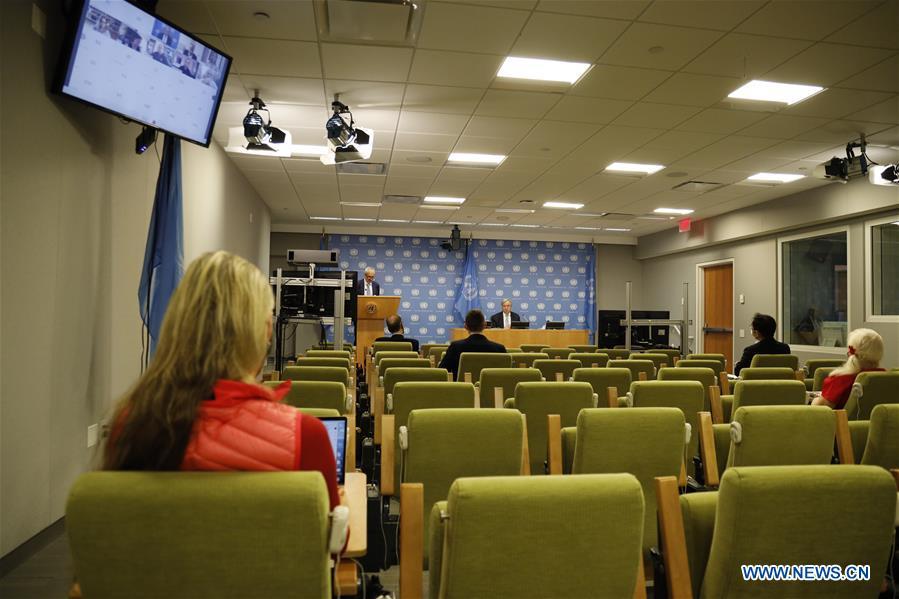 Reporters attend a press conference held by UN Secretary-General Antonio Guterres (R, Rear) at the UN headquarters in New York, on Oct. 23, 2020. Guterres on Friday welcomed the signing of a cease-fire agreement by the Libyan parties in Geneva under the auspices of the United Nations. (Xinhua/Xie E)

UN Secretary-General Antonio Guterres on Friday welcomed the signing of a cease-fire agreement by the Libyan parties in Geneva under the auspices of the United Nations.

"This is a fundamental step toward peace and stability in Libya. I congratulate the parties for putting the interest of their nation ahead of their differences," Guterres told reporters at UN Headquarters in New York.

He appealed to all stakeholders and regional actors to respect the provisions of the cease-fire agreement and ensure its implementation without delay.

He called on the international community to support Libyans in implementing the cease-fire and in bringing an end to the conflict. This includes ensuring the full and unconditional respect for the Security Council arms embargo on Libya, he said.

Guterres urged the Libyan parties to maintain the current momentum and show the same determination in reaching a political solution to the conflict, resolving economic issues and addressing the humanitarian situation.

The UN Support Mission in Libya is making preparations to resume the Libyan Political Dialogue Forum, which will be preceded by a series of meetings and consultations that would facilitate the resumption of inclusive intra-Libyan political talks, he said.

There is no military solution to the conflict in Libya. This cease-fire agreement is a critical step. But there is much hard work ahead. The United Nations will continue to support the Libyan parties in the search for lasting peace in their country, he said.

The two Libyan delegations to the 5+5 Joint Military Commission talks signed a complete, countrywide, and permanent cease-fire agreement with immediate effect, she said. "The agreement was facilitated by the United Nations and we signed it as witnesses."

Williams said the Libyan parties agreed that all military units and armed groups on the front lines shall return to their camps. This shall be accompanied by the departure of all mercenaries and foreign fighters from Libya within a maximum period of three months.

The cease-fire does not apply to UN-designated terrorist groups, she said.

The parties agreed, with the support and participation of the United Nations, to immediately start the identification and categorization of all armed groups and entities on the entire Libyan territory, whether integrated into state institutions or not, she said.

Guterres said the Joint Military Commission wanted the UN Security Council to adopt a resolution to ensure compliance and implementation of the cease-fire agreement by all internal and external parties.

He said the appeal by the parties will be conveyed to the Security Council and will be heard.

"So, there is a very clear commitment of the parties to themselves (to) implement the agreement and, at the same time, to ask for the support of the UN in that implementation. But it is a Libyan-led process of implementation and of monitoring."

On the other hand, there is another process in parallel that is taking place for the convening of the Political Dialogue Forum, he said, expressing the hope that this will be a very important step, making the Libyans come together in finding a way to move forward with the political process, taking into account the necessary establishment of future institutions in Libya that will guarantee peace and stability.

The United Nations also is working with the African Union, which is preparing a large meeting for reconciliation of different entities in Libya, he said.

He expressed the hope that the Libya cease-fire may serve as inspiration for the peaceful settlement of other conflicts in the world.

"In the context of my repeated calls for a global cease-fire so that we can focus all our energies on the COVID-19 pandemic, and with the inspiration of the Libyan agreement, now is the time to mobilize all efforts to support the mediations taking place to end the conflicts in Yemen, Afghanistan and in Armenia and Azerbaijan, where active hostilities are causing immense suffering for civilians," he said. "There is no military solution for any of these conflicts. The solution must be political."