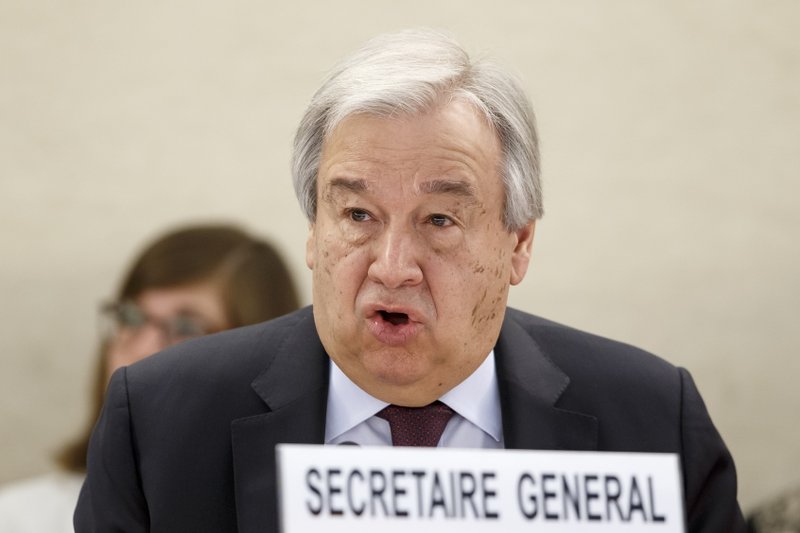 U.N. Secretary-General Antonio Guterres addresses his statement, during the opening of the High-Level Segment of the 43rd session of the Human Rights Council, at the European headquarters of the United Nations in Geneva, Switzerland, Monday, Feb. 24, 2020. (Photo: AP)

U.N. Secretary-General Antonio Guterres warned Tuesday that the world is facing “a dangerous epidemic of misinformation” about COVID-19 and announced a U.N. campaign to flood the internet with facts and science to counter what he called “a poison” that is putting lives at risk.

The U.N. chief decried what he described as a global “misinfo-demic” that is spreading harmful health advice, “snake-oil solutions,” falsehoods, and wild conspiracy theories.

Guterres urged social media organizations to do more to counter the misinformation and to “root out hate and harmful assertions about COVID-19.”

“Hatred is going viral, stigmatizing and vilifying people and groups,” he said in a video statement. “Mutual respect and upholding human rights must be our compass in navigating this crisis.”

The U.N. chief said people around the world “are scared” and want to know what to do and where to turn for advice, and they need science.

He said the United Nations “will be in touch with various social media companies,” adding that quite a few of them are actively trying to root out disinformation and suspending accounts of people pushing out information “that is plain wrong and dangerous.”

Dujarric said the U.N. recognizes the delicate balance between free speech and misinformation, saying “that’s a balancing act that is played out every day around the world even in the most free democracies.”

“The secretary-general is not going to be the one to decide,” Dujarric said.

“What we are doing is we will push out scientifically based information, information that will help us as a global community fight the virus,” he said. “Social media companies, news organizations are making those decisions all the time, but I think it is important that we all do what we can to fight the spread of dangerous misinformation on fighting the virus.”

The secretary-general saluted “journalists and others fact-checking the mountain of misleading stories and social media posts.”

He called for trust in science and in institutions “grounded in responsive, responsible, evidence-based governance and leadership.”

“Together, let’s reject the lies and nonsense out there,” Guterres said. “With common cause for common sense and facts, we can defeat COVID-19 -- and build a healthier, more equitable, just and resilient world.”