The United Nations Humanitarian Office in South Sudan has issued a statement condemning an attack on a World Food Program aid convoy in the country's Shambe North area, where one person is feared dead and three others were injured. 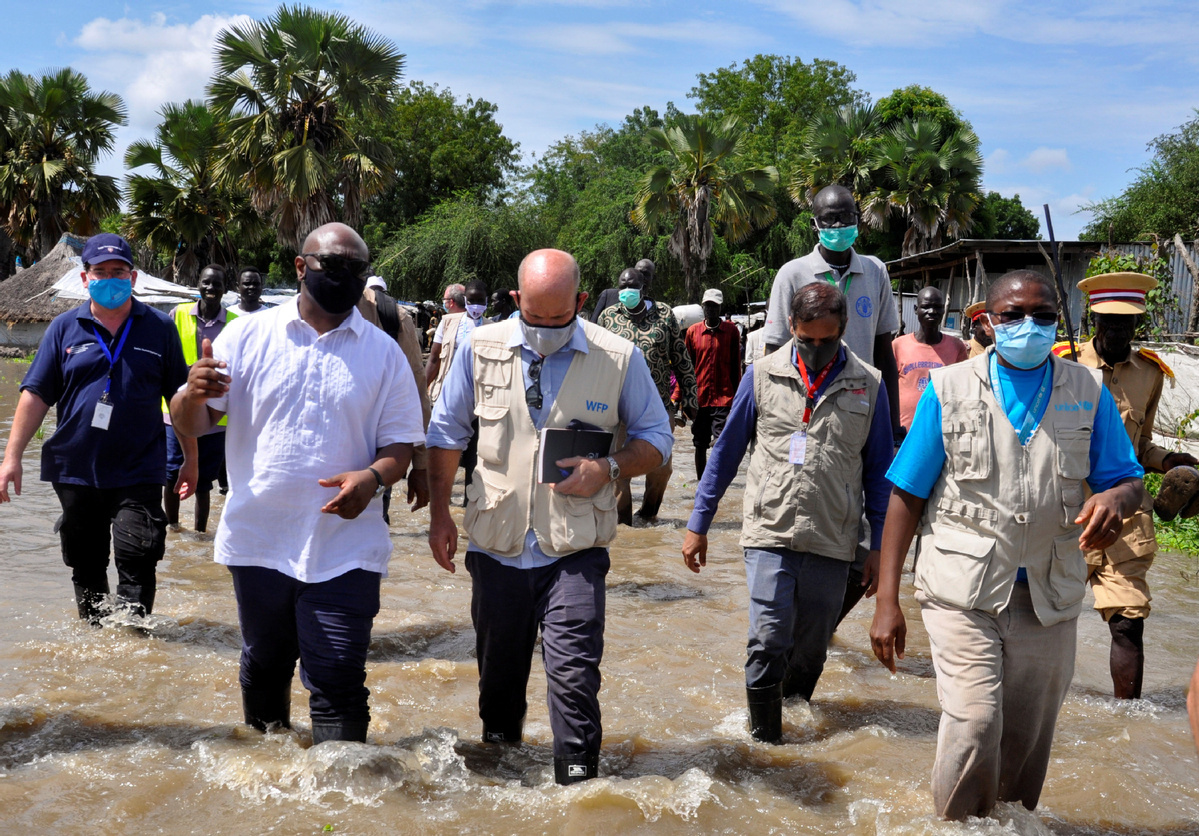 Alain Noudehou, UN Humanitarian Coordinator in South Sudan, and Matthew HollingWorth, the Country Director of World Food Program (WFP), wade through flood water with members of their delegation as they visit civilians that were displaced due to flood water from the broken dykes on Nile river, in Duk padiet county of Jonglei State, in South Sudan September 24, 2020.(Photo: agencies)

In a statement released on Oct 8 by Alain Noudehou, the UN Humanitarian Coordinator in South Sudan, the UN strongly condemned the unprovoked attack on a WFP boat convoy and called for an end to repeated acts of violence, which are disrupting life-saving assistance to people affected by floods.

"The violence against humanitarian workers must stop. I strongly condemn this attack on a humanitarian convoy that was transporting food to flood-affected people. Perpetrators must be brought to justice. I call upon the government and all parties to protect humanitarians and people supporting efforts to provide assistance to the millions of people in need," Noudehou said.

According to Noudehou's statement, a WFP boat convoy carrying food for vulnerable people was ambushed by armed actors on Oct 5 close to Shambe town. The convoy was transporting food to people affected by floods in the Upper Nile.

Gunfire sank one vessel, and its cargo of much-needed humanitarian supplies. During the attack, three of the cargo vessel staff suffered injuries and one person is missing and presumed killed.

Matthew Hollingworth, the WFP Country Director for South Sudan, called for unimpeded humanitarian access, respect for international law and conditions that allow humanitarian workers to do their jobs in safety without hindrances.

"WFP condemns in the strongest terms any attack on humanitarian workers and contractors, who risk their lives delivering much-needed food assistance to the most vulnerable people. We call on the South Sudanese authorities to hold those responsible for this unspeakable violence accountable," Hollingworth said. "Our thoughts are with the families of the missing crew member, and we wish a speedy recovery to those who suffered injuries. Their dedication will not be forgotten."

According to the UN Humanitarian Coordinator in South Sudan, some 800,000 people have been affected by flooding in South Sudan since July. A total of 37 counties out of 78 are affected, with many areas still underwater and people unable to tend to their lands and livestock. An estimated 368,000 have been displaced, and women and children are the most affected.

"I stand by WFP and all humanitarians working on the frontline to provide life-saving assistance. Humanitarian workers continue to work in difficult conditions to reach communities affected by the floods, but we need unimpeded access in order to be able to work in a safe environment," Noudehou said.

South Sudan remains one of the world's most dangerous places for humanitarian workers and one of the most precarious nations. Two years after the end of a civil war that killed nearly 400,000 people, roughly half the population is hungry and the UN has warned South Sudan is one of a handful of countries facing potential famine.