The United Nations rights office said on Tuesday it was "deeply concerned" at the escalation of violence in the occupied Palestinian territories, east Jerusalem and Israel. 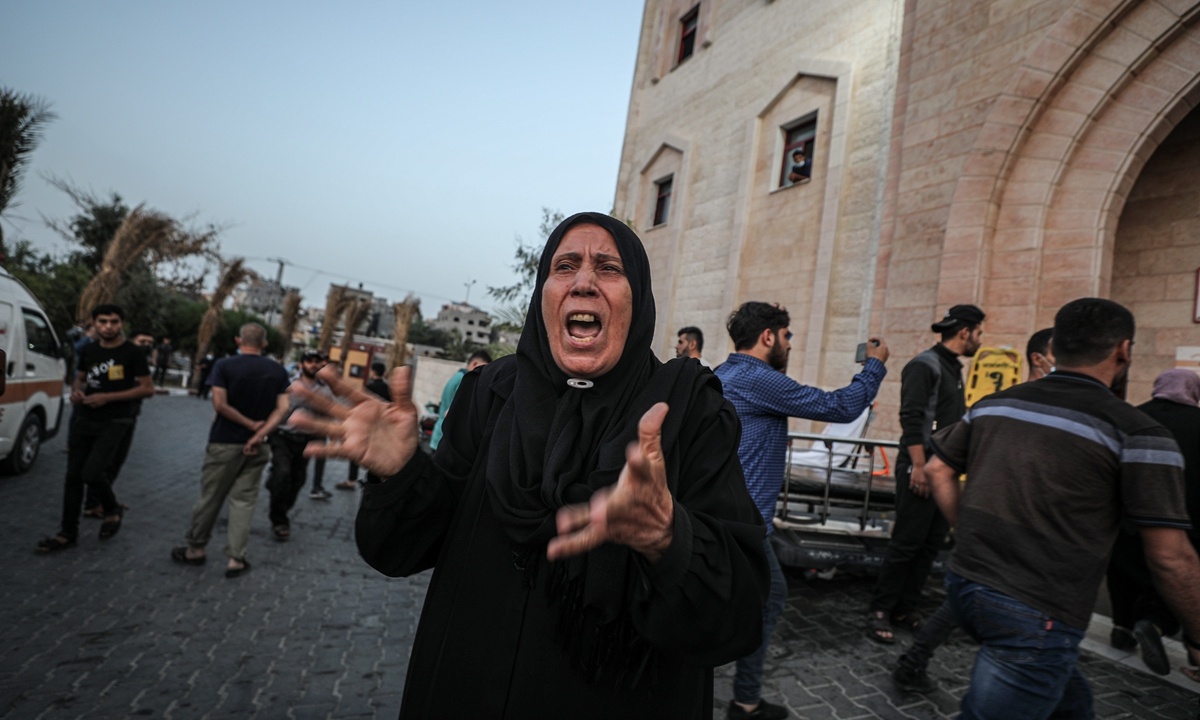 A woman reacts as wounded Palestinians are being brought to Indonesian Hospital to receive medical treatment after Israeli airstrike in the Gaza Strip, on May 10 in Beit Lahia, Gaza. Photo: VCG

"We condemn all violence and all incitement to violence and ethnic division and provocations," spokesperson Rupert Colville told reporters in Geneva. He said Israeli security forces must allow the freedom of expression, association and assembly.

Israel and Hamas exchanged heavy fire on Tuesday, with 22 Palestinians killed in Gaza, in a dramatic escalation between the bitter rivals sparked by unrest at Jerusalem's flashpoint Al-Aqsa Mosque compound.

Sixty-five others were wounded, Gaza authorities said. Israeli Prime Minister Benjamin Netanyahu warned that Hamas had crossed a "red line" by directing missiles toward Jerusalem and that the Jewish state would "respond with force."

"We will not tolerate attacks on our territory, our capital, our citizens and our soldiers. Those who attack us will pay a heavy price," said Netanyahu, who held meetings with the heads of the army and the Shin Bet security agency.

Israel's army said 150 rockets had been launched from Gaza, dozens of which were intercepted by the Iron Dome Aerial Defense System, with no casualties reported.

The military said it had targeted "two rocket launchers, two military posts," a tunnel and eight Hamas operatives in Gaza. Hamas sources confirmed to AFP that one of their commanders, Mohammed Fayyad, had been killed.

Diplomatic sources told AFP that Egypt and Qatar, who have mediated past Israeli-Hamas conflicts, were attempting to calm tensions.

The UN Security Council held an urgent meeting Monday on the unrest in Jerusalem but issued no immediate statement, with diplomats saying the US believed public comments would be counterproductive. The negotiations among the 15 nations on the Security Council were over a text that could be watered down from an initial draft proposed by Norway, diplomats said.

More than 300 people were injured on Monday. The bloodshed has prompted statements of deep concern from governments and international organizations, and pleas for an end to the violence.

Shortly after the Security Council meeting, organizers of a pro-Israel march that had become a flash point canceled the event.

The draft Security Council statement, seen by AFP, would call on Israel to "cease settlement activities, demolitions and evictions" including in east Jerusalem. The Norwegian draft was jointly put forward with Tunisia, a fellow nonpermanent member that called Monday's meeting, as well as China.