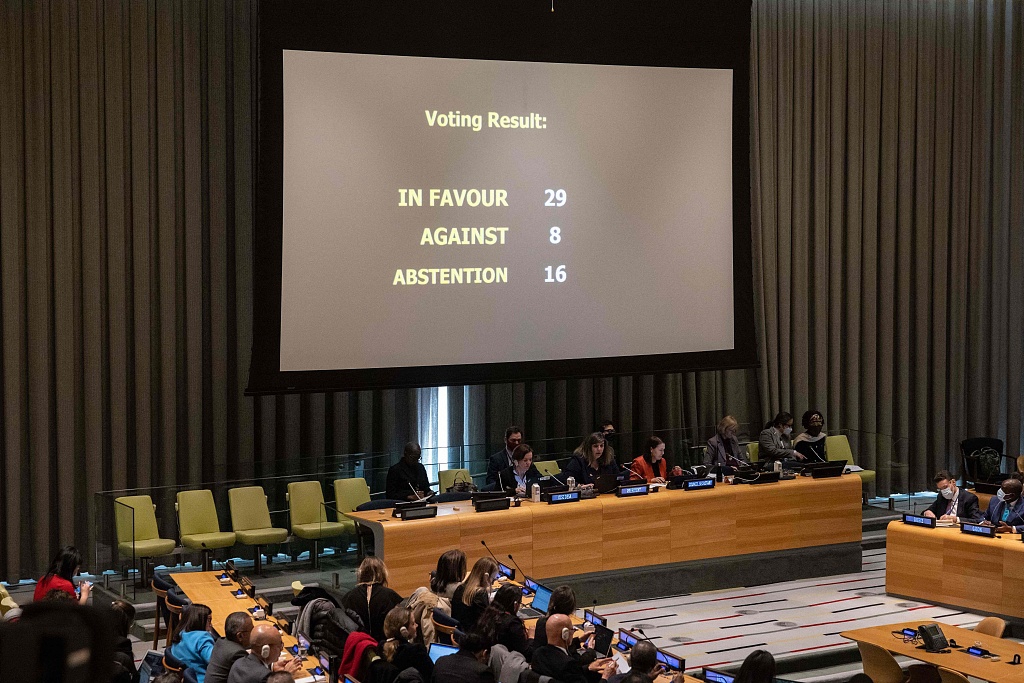 Member countries vote on the removal of Iran from membership of the Commission on the Status of Women during the 5th plenary meeting of the Economic and Social Council at the United Nations headquarters in New York City, U.S., December 14, 2022. (Photo: CFP)

The United Nations Economic and Social Council (ECOSOC) on Wednesday adopted a resolution on the removal of Iran's membership in the UN Commission on the Status of Women.

The draft resolution, introduced by the U.S., obtained 29 votes "in favor" while eight ECOSOC members including China voted against it and 16 countries abstained.

The resolution voices concern over Iran "administering policies flagrantly contrary to the human rights of women and girls and to the mandate of the Commission on the Status of Women," and "decides to remove with immediate effect" Iran from membership in the commission for the remainder of its 2022-2026 term.

Speaking before the voting, Geng Shuang, China's deputy permanent representative to the United Nations, stressed that the draft resolution "has no basis in law at all," noting ECOSOC rules of procedure contain no provisions on removing membership in the Commission on the Status of Women.

Removing the membership of a member state that has been democratically elected into the commission by ECOSOC would set a very dangerous precedent, he said.

The draft resolution is completely imposed on delegations. The sponsor has refused to engage in dialogue or consultations or to reflect the views of member states. Its practice totally runs counter to fairness, democracy, openness and transparency, Geng said, adding that the resolution does not help solve any problem.

In the resolution, there is no mentioning of Iranian women's huge sufferings caused by the sponsor's indiscriminate unilateral sanctions against Iran, he said. "This is nothing but naked bullying, hypocrisy and double standard."

China believes that the Iranian government and its people can properly handle their domestic affairs. As an active advocate for and supporter of human rights and women's advancement, China has always adhered to true multiculturalism, to international law and multilateral rules, to constructive dialogue and communication on an equal footing based on respect for the sovereignty and national conditions of all countries, Geng said.

He pointed out that addressing human rights and women's issues by means of removing Iran from the commission would only set a dangerous precedent, send out the wrong message and bring about negative consequences.

The Commission on the Status of Women is the principal global intergovernmental body exclusively dedicated to the promotion of gender equality and the empowerment of women established in June 1946.