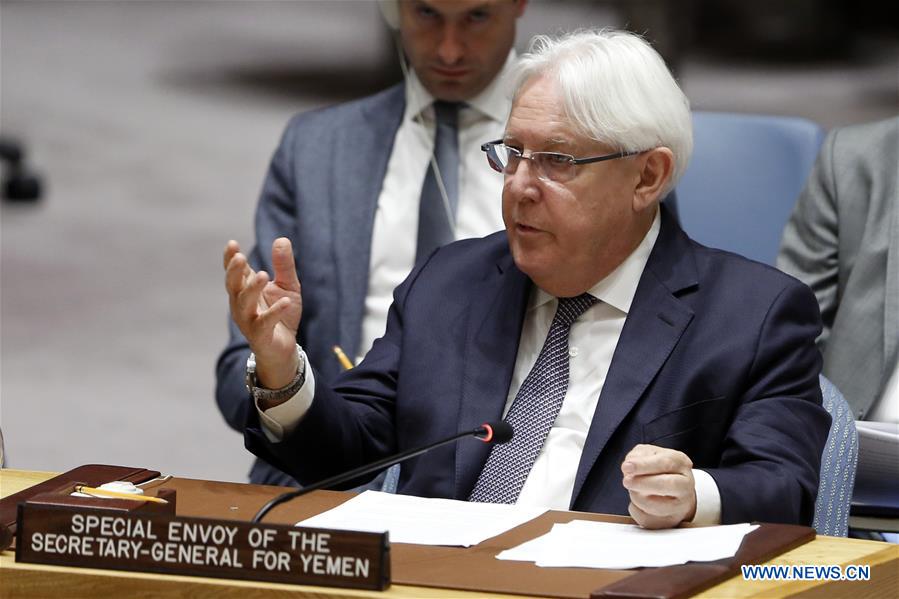 Martin Griffiths (Front), the UN special envoy for Yemen, briefs the UN Security Council meeting on the situation in Yemen at the UN headquarters in New York, Aug. 2, 2018. Martin Griffiths said Thursday that he is going to invite the warring parties in the war-torn country to consultations in Geneva next month. (Photo: Xinhua)

UNITED NATIONS, Aug. 2 (Xinhua) -- The UN special envoy for Yemen, Martin Griffiths, said Thursday that he is going to invite the warring parties in the war-torn country to political consultations in Geneva next month.

"After having consulted with the parties, I plan therefore to invite them to Geneva on Sept. 6 for a first round of consultations," Griffiths told the Security Council.

The consultations will provide the opportunity for the parties to discuss the framework for negotiations, to agree on relevant confidence-building measures and specific plans for moving the process forward, he said.

He asked for support of the Security Council, saying he did not come lightly to that decision. "I have based this on the advice given to me in the months since assuming my responsibilities by Yemenis from all quarters."

Griffiths was upbeat about the peace prospects in Yemen. "I know from this engagement (with Yemenis) that a political solution to this war ... is available."

An end to the war cannot come too soon for the people of Yemen. Millions more Yemenis will depend on humanitarian and more lives will be cost if the war continues, he said.

He said the United Nations has yet to find a peaceful solution to Hudaydah, the Red Sea port the Saudi-led military coalition is trying to capture from Houthi rebels.

"We have made progress particularly as regards to a UN role in the port, which was agreed by Ansar Allah (the Houthis). But the gap is not closed. We will continue our efforts to find a peaceful solution to Hudaydah," said Griffiths. "I continue to enjoy close cooperation and support from the government of Yemen as well as the (Saudi-led) coalition leadership. I have had a series of constructive and positive meetings with the Ansar Allah senior leadership."

But he said the issue of Hudaydah should not overshadow his overall peace efforts. "Let us not throw away what we have achieved. I am determined to build on it in our consultations. But let us not allow progress or the absence of it on Hudaydah deter us from our primary focus on the search for a political solution to this conflict."

"Delays in reaching a political solution cost lives. The maths is as simple as that," he told the Security Council.

British ambassador to the United Nations Karen Pierce, whose country holds the Security Council presidency for the month of August, said after the council meeting on Yemen that the council members were united in supporting Griffiths' decision to bring the Yemeni warring parties to talks in Geneva next month.

The council members were united in calling on all parties to come to the Geneva talks, she told reporters.

Yemen has been in civil war in the past three years, pitting Houthi rebels and forces loyal to the government of Abdrabbuh Mansur Hadi. The Saudi-led coalition Arab military coalition with the support of the United States launched an air campaign in March 2015 to try to reinstate the Hadi government.