The UN Special Envoy to Yemen Martin Griffiths left Yemen's rebel-held capital Sanaa on Thursday after a four-day visit to end a disagreement over the implementation of a peace deal reached in Stockholm in December last year. 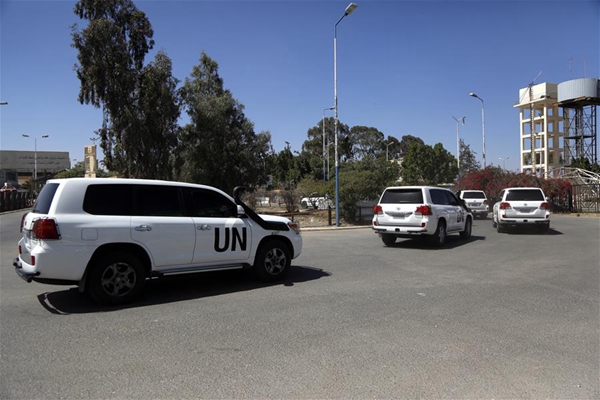 The convoy of the UN Special Envoy to Yemen Martin Griffiths arrives at an airport in Sanaa, Yemen, on Jan. 31, 2019. (Photo: Xinhua)

"Deeply concerned about recent hostilities in Yemen, the special envoy calls on all parties to exercise utmost restraint and de-escalate tensions," Griffiths said on Twitter after departing Sanaa.

"What we need now is speedy redeployments according to an RCC (redeployment coordination committee) plan," he added.

During his visit, Griffiths discussed with the Houthi leaders the ways to end the disagreement with their foe, the exiled government of President Abd-Rabbu Mansour Hadi.

They also talked about withdrawal of both rival forces from the country's port city of Hodeidah.

He also visited rebel-held Hodeidah, the main lifeline entry for Yemen's most food imports and international aid on the Red Sea.

Griffiths inspected the cease-fire between the Houthi fighters and the government forces, which have advanced and recaptured the southern and eastern outskirts of the port city.

The UN envoy has been shuttling between the Yemeni rival parties in Sanaa and the Saudi capital Riyadh to rescue the peace deal.

The deal was the major breakthrough into the four-year devastating civil war that has killed tens of thousands of people and pushed the impoverished Arab country to the brink of starvation.

Under the deal that went into force on Dec. 18, 2018, and focused on Hodeidah as the first step in trust-building, the cease-fire between the warring parties has largely held despite some skirmishes.

However, both rival parties have so far failed to withdraw their forces from the city and its outskirts and kept trading accusations of breaching the truce.

The UN said the discussions have been stalled because of different interpretations of the Stockholm Agreement over who would control key points of Hodeidah during the partial cease-fire.

Saudi Arabia and the United Arab Emirates (UAE) have been leading an Arab military coalition that intervened in Yemen in 2015 to support the internationally-recognized government of President Abd-Rabbu Mansour Hadi after the Houthi rebels forced him into exile and seized much of the country's north.

On Wednesday, the UAE Minister of State for Foreign Affairs Anwar Gargash said the Arab coalition "is prepared to use more calibrated force to prod Houthi compliance with Stockholm Agreement."

"It is either the implementation of the Stockholm Agreement or the hell which is waiting for the invaders and their mercenaries," al-Houthi tweeted.