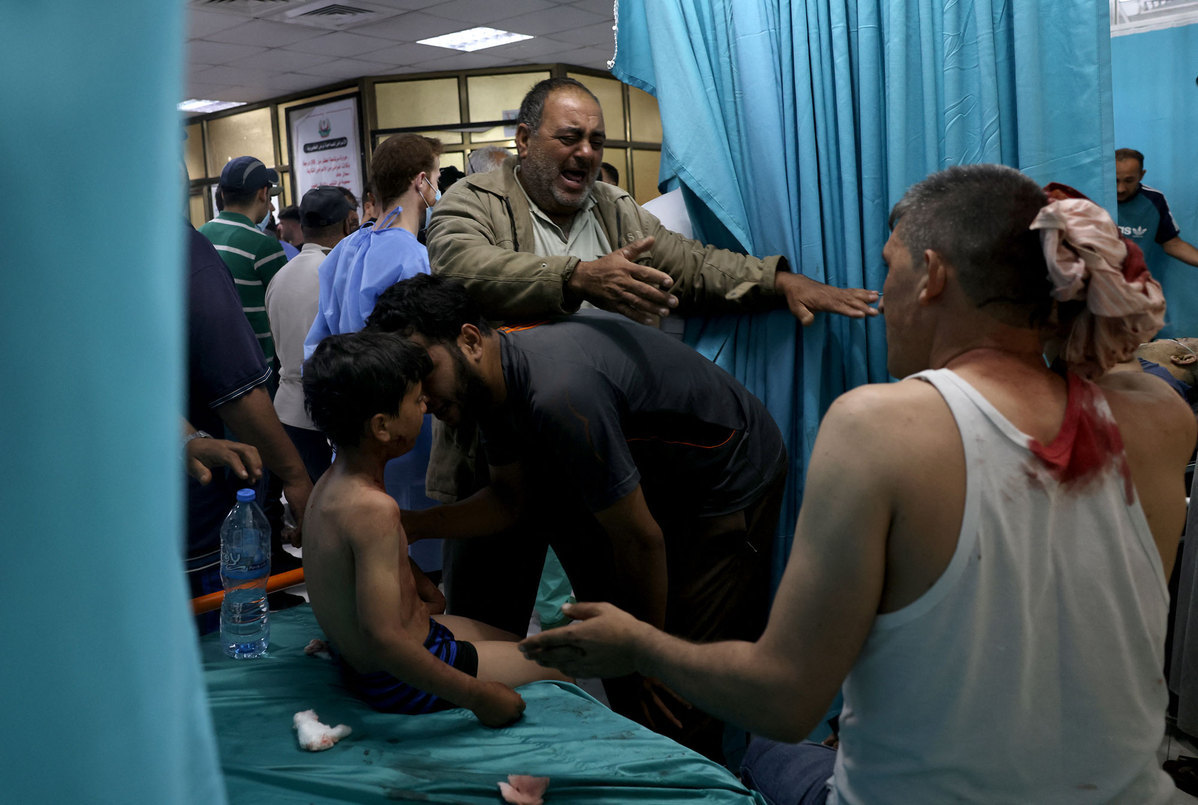 A hospital in the Gaza Strip is crowded with injured people and their relatives on Monday amid a flare-up in Israeli-Palestinian violence that saw at least nine people killed in air raid. (Photo: Agencies)

Zhang Jun, China's permanent representative to the United Nations and president of the UN Security Council for May, condemned on Monday the violence against civilians in the Middle East and called on the international community to take action to move toward peace and security.

China is deeply concerned about the escalating tensions and violence in East Jerusalem, Zhang said. The clashes between Israeli security forces and Palestinians in the recent days are disturbing, he said.

China condemns actions against civilians, Zhang said. It calls on all sides to exercise restraint and refrain from provocative actions and rhetoric. China also encourages immediate action toward de-escalation.

Zhang made the statement after the Security Council held emergency closed-door consultations on the situation in East Jerusalem, which he chaired as president of the council. The ambassador made the statement in his national capacity.

Earlier on Monday, Israeli forces entered the Al-Aqsa Mosque in Jerusalem's walled Old City, a holy site in Islam that is also revered by Jews. More than 300 Palestinians were reportedly injured after the Israeli police fired rubber bullets, stun grenades and tear gas at worshippers at the compound.

Palestinian families in the East Jerusalem neighborhoods of Sheikh Jarrah and Silwan are facing impending expulsion to make way for Jewish settlers.

The two sides conducted air raids and rocket attacks against each other, prompting international concern.

Zhang called on Israeli authorities to take measures to prevent violence, threats and provocations against Muslim worshippers. He stressed that the historical status quo of holy sites in Jerusalem's Old City should always be upheld and respected.

The ambassador said China is deeply concerned about the looming eviction of Palestinian families in the Sheikh Jarrah and Silwan neighborhoods in East Jerusalem.

China urges Israel to cease demolitions, evictions and all settlement activities, in line with its obligations under relevant UN resolutions as well as international law, Zhang said.

Given the volatile situation and potential for escalation, the Security Council should reiterate its unwavering support for the two-state solution, the ambassador said.

Zhang also expressed strong condemnation of the terrorist attack in Dasht-e-Barchi in Kabul, Afghanistan, on Saturday.

The attack, outside a secondary school, killed 50 people, many of whom were girls who were hit by the explosion as they left class. More than 150 civilians also were injured in the attack.

"The members of the Security Council expressed their deepest sympathy and condolences to the families of the victims and to the government of Afghanistan, and they wished a speedy and full recovery to those who were injured," Zhang said in a statement.

Zhang said that Security Council members are concerned about the continuing high level of violence in Afghanistan, which is causing many civilian casualties. They stressed that efforts must be made to end violence and protect civilians, he said.

Council members expressed grave concern about the significant number of attacks on schools and education facilities in Afghanistan in recent months, as well as the significant implications of such attacks on the safety of students and their ability to receive education, he added.

The members of the Security Council reaffirmed that terrorism in all its forms and manifestations constitutes one of the most serious threats to international peace and security.

They emphasized that all perpetrators, organizers, financiers and sponsors of these "reprehensible acts of terrorism "should be held accountable and brought to justice, Zhang said.

Council members urged all states, in accordance with their obligations under international law and Security Council resolutions, to cooperate actively with the government of Afghanistan and all other relevant authorities in this regard, the envoy said.

The Security Council reiterated that any act of terrorism is criminal and unjustifiable, regardless of motivation and wherever, whenever and by whomever committed, he said.