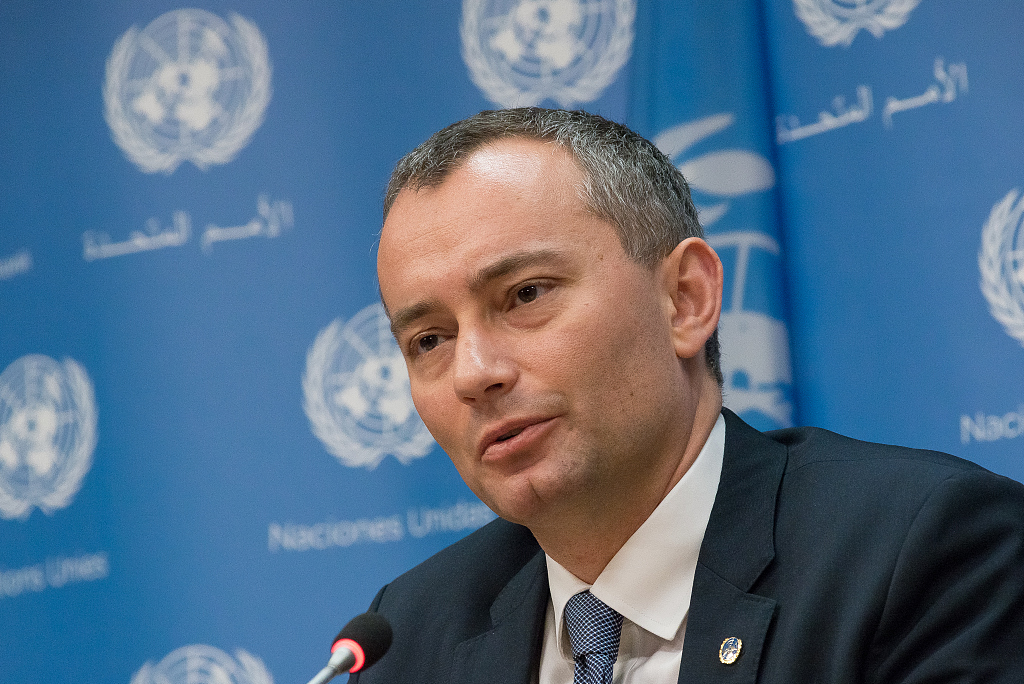 "I remain deeply concerned by the state of our collective efforts and the weakening of the international consensus to achieve an end to the occupation and the realization of a negotiated two-state solution of the Israeli-Palestinian conflict based on the 1967 lines, international law, relevant UN resolutions and previous agreements," he told the Security Council.

On its own, no amount of humanitarian or economic support will resolve the conflict. It requires political solutions, he said.

The situation in Gaza continues to be perilous, with the persistent threat of another major escalation and the continued suffering of the population, said Mladenov.

It is tragic and unacceptable that people continue to be killed and injured unnecessarily during demonstrations, by indiscriminate rocket attacks or by other hostile acts, he said.

Hamas and Palestinian Islamic Jihad must stop launching rockets and mortars toward Israeli civilian populations. Israeli security forces have the responsibility to exercise restraint and should only use lethal force against demonstrators when strictly unavoidable in order to protect life, he said.

"I unequivocally condemn all attacks on Palestinian and Israeli civilians, call on all to refrain from violence and on leaders to clearly condemn such acts when they occur... All perpetrators must be held accountable for their crimes."

The expansion of Israeli settlements has no legal effect and constitutes a flagrant violation of international law. It must cease immediately and completely, said Mladenov.

Settlement expansion in occupied East Jerusalem, which further undermines the viability of the two-state solution with Jerusalem as the future capital of both Israel and Palestine, is particularly concerning, he said.

During the Israeli election campaign, statements were made by some politicians expressing support for the unilateral annexation of all or parts of the West Bank, he noted. "Such a prospect would be devastating to the potential of reviving negotiations, regional peace, and the very essence of the two-state solution."

Between March 25 and June 10, 2019, the Israeli authorities advanced, approved or tendered nearly 6,000 housing units in the occupied West Bank, including East Jerusalem. This constitutes the largest settlement advancement in two years, said Mladenov.

Demolitions and seizures of Palestinian-owned structures by Israeli authorities also continued across the occupied West Bank, including East Jerusalem, during this period, he said.

Citing the absence of Israeli-issued building permits, which are nearly impossible for Palestinians to obtain, 92 Palestinian-owned structures were demolished or seized, resulting in the displacement of 104 people, he said.

Mladenov also voiced concern about Israel's withholding of revenues of the Palestinian Authority.

"The Palestinian government is facing a very serious financial crisis, which, unless resolved, risks triggering a series of dangerous developments that will be difficult to mitigate and contain, including the potential collapse of the (Palestinian) Authority and the undermining of 25 years of international investment in supporting the two-state solution under the Oslo process," he warned.

He called on Israel to restore the revenue transfers in full and called for constructive engagement of both sides on this issue.

Expressing deep concern about the deteriorating humanitarian and economic situation in Gaza, he called on Israel to ease the restrictions on the movement of goods and people to and from Gaza, with the goal of ultimately lifting them.

Mladenov called on all Palestinian factions to engage with Egypt on intra-Palestine reconciliation.

"The United Nations remains steadfast in its support to Egypt's efforts in this regard, and I call on all (Palestinian) factions to take concrete steps to ensure the reunification of Gaza and the West Bank under a single, democratic, and legitimate national government. Gaza is, and must remain, an integral part of a future Palestinian state as part of the two-state solution."