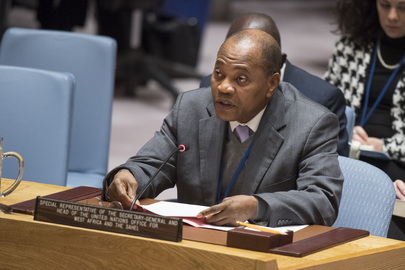 “Following a notable decline in Boko Haram attacks in the first half of the year, there has been an uptick in the number of incidents since September last year, with a peak of 143 civilian casualties alone in November 2017,”  said Mohamed Ibn Chambas, head of the United Nations Office for West Africa.

Chambas pointed out that the attacks in Mali and within the Mali-Niger-Burkina Faso tri-border area are mainly attributed to Al-Qaida affiliated groups and the Islamic State group in the greater Sahara. “Due to increasing security challenges, the government of Niger has decided to allocate 17% of public expenditures in 2018, compared to 15% in 2017, to the security sector,” he said.

Commending the efforts of the Multinational Joint Task Force operating in the region, he stressed that the comprehensive response of the region to address the Boko Haram threat “must be supported by the international community.”

Meanwhile, he noted that migration has become one of the most lucrative activities for criminal networks across West Africa and the Sahel.

“Stemming human trafficking must continue to be a top priority in 2018 as recently underscored by Secretary-General Guterres,” he said.