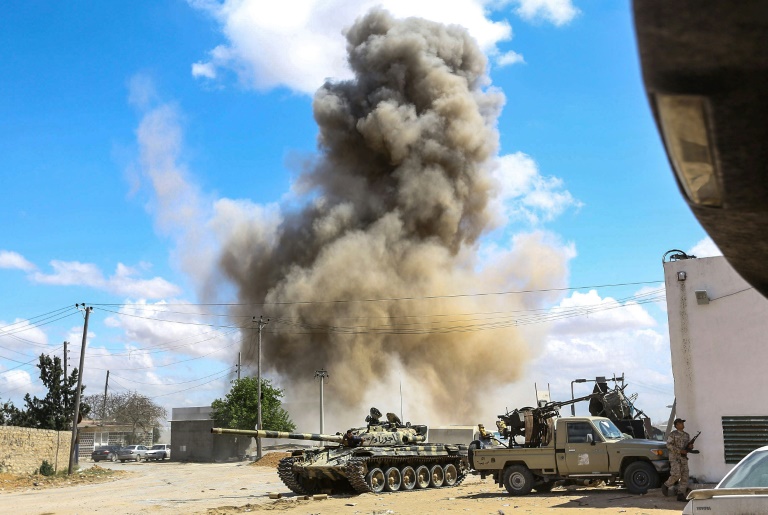 Fighting broke out on April 4 when strongman Khalifa Haftar launched an offensive to take Tripoli, the western seat of the UN-recognised Government of National Accord.(Photo: AFP)

The UN's Libya envoy warned Thursday of "a widening conflagration" in the North African country, saying international divisions had encouraged strongman Khalifa Haftar to launch his assault on Tripoli.

But for now, Ghassan Salame told AFP in an interview, there was "deadlock" in fighting south of the capital between Haftar's self-styled Libyan National Army (LNA) and the internationally recognised government.

"After the very first successes of the Libyan National Army two weeks ago, we are witnessing a military deadlock," he said.

Fighting broke out on April 4 when Haftar and his LNA, based in the country's east, launched an offensive to take Tripoli, the western seat of the UN-recognised Government of National Accord (GNA).

Haftar's offensive forced the UN to postpone a national conference that was to draw up a roadmap to elections in a bid to turn the page on years of chaos since the 2011 ouster of dictator Moamer Kadhafi.

The fighting has so far left at least 205 people dead and more than 900 wounded, the World Health Organization said Thursday.

With both sides dug in, "Tripoli witnessed the heaviest fighting since the outbreak of clashes, with indiscriminate rocket fire on a high-density neighbourhood in the Libyan capital," said UN spokesman Stephane Dujarric on Wednesday.

More than 25,000 have been displaced, according to the International Organization for Migration.

Salame told AFP that "international divisions existed before the attack" and had "encouraged" Haftar, who is backed by Russia and seen by his allies Egypt and the United Arab Emirates as a bulwark against Islamists.

The UN Security Council has been deeply split on how to address the crisis in Libya after fresh negotiations on a draft resolution demanding a ceasefire in Tripoli failed to yield agreement.

Russia has sought to block any language that criticised Haftar's offensive as a threat to Libya's stability.

Germany, which holds the council presidency, called for an urgent meeting Thursday, when the council was to hear a briefing on the situation on the ground and "consult on the way forward", according to a note seen by AFP.

Britain has put forward a draft resolution calling for an immediate ceasefire and de-escalation but Russia put up its concerns over language that criticized Haftar's offensive.

A slightly watered-down version was put forward by Britain on Wednesday but the three African countries on the council -- Equatorial Guinea, Ivory Coast, South Africa -- blocked it.

Moscow also said the proposed measure even after it was amended was "still far away from accommodating our concerns", according to a note from the Russian mission seen by AFP.

The revised text did not single out Haftar's forces, but instead expressed "grave concern at military activity" near Tripoli, "including the launching of a military offensive by the LNA".

The three African countries insisted that there be a reference to an African Union statement on the need for all parties fighting in Tripoli to protect civilians including migrants and refugees, according to documents seen by AFP.

Britain had hoped to hold a vote before Friday, but that now looks unlikely. Diplomats said the United States appeared to be dragging its feet in pushing for a quick adoption of the draft resolution.