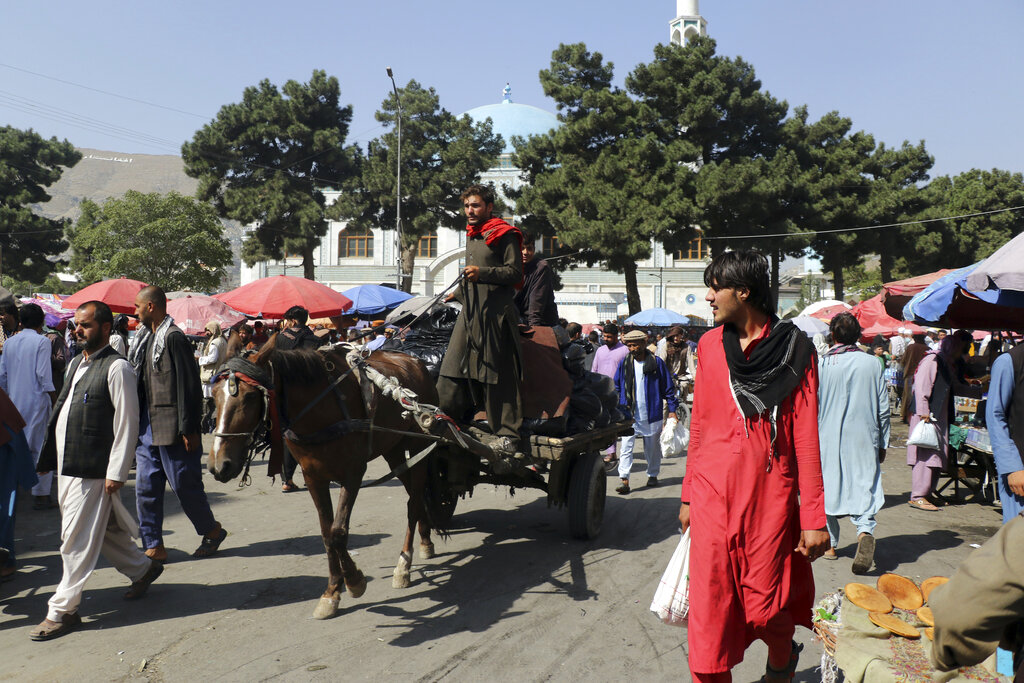 The U.N. special envoy for Afghanistan urged the world Thursday to unite to prevent the collapse of the Afghan economy, to address fears that the Taliban's Islamic state may spread to its neighbors, and to fight terrorism.

She told the U.N. Security Council it will have to decide how to engage with many of the 33 members of the Taliban government who are on the U.N. sanctions blacklist, including the prime minister, the two deputy prime ministers and the foreign minister.

But Lyons said the worsening humanitarian crisis in Afghanistan must be addressed now, while warning there is another "looming crisis" caused by the freezing of billions of dollars in Afghan assets. The freeze will cause "a severe economic downturn that could throw many more millions into poverty and hunger" and may spark a refugee exodus and set the country back for generations, she said.

Lyons said ways must be found to provide humanitarian relief "on a huge scale." There is also a need, she said, to quickly allow money to flow to Afghanistan to "prevent a total breakdown of the economy and social order," though while creating safeguards to ensure the money is not misused by the Taliban authorities.

The Afghanistan central bank's $9 billion in reserves, most of which is held in the United States, was frozen after the collapse of the former government. Afghanistan was also slated to access about $450 million on Aug. 23 from the International Monetary Fund, but the IMF blocked the release because of a "lack of clarity" about a new government.

"The economy must be allowed to breathe for a few more months, giving the Taliban a chance to demonstrate flexibility and a genuine will to do things differently this time, notably from a human rights, gender and counterterrorism perspective," Lyons said.

"Afghanistan is on the verge of an economic collapse" that will create a larger humanitarian crisis and exacerbate migration in the region and the world, he said.

Deputy Chinese ambassador Geng Shuang also urged the assets' release, saying: "These assets belong to Afghanistan and should be used for Afghanistan, not as leverage for threat or restraints."

As U.S. forces neared the end of their Aug. 31 withdrawal from Afghanistan after 20 years, Taliban fighters took control of province after province and entered the capital of Kabul on Aug. 15 without a fight. The Taliban takeover sparked a chaotic and harrowing rush to leave the country by foreigners and Afghans opposed to their harsh brand of Islam, which during its 1996-2001 rule saw women barred from almost all work and girls prevented from going to school.

The United States had a message for the Taliban on Thursday: If it lives up to all its commitments, brings greater stability to Afghanistan and the region, demonstrates widespread inclusion, and protects the gains of the last 20 years "we'll work with it."

But deputy U.S, ambassador Jeffrey DeLaurentis, who delivered the message at the Security Council meeting, stressed that "any legitimacy and support will have to be earned."

He said the standards the international community has set are clear and include facilitating safe passage for Afghans and foreign nationals who want to leave Afghanistan and respecting the country's obligations under international humanitarian law, "including those related to the protection of civilians."

Despite the Taliban's statements of a general amnesty, however, Lyons said the United Nations has received "credible allegations of reprisal killings," the detention of officials who worked for previous administrations, house-to-house searches by Taliban who have seized property particularly in Kabul, and restrictions on women working and limitations to girls' education in some regions.

Nobel Peace Prize laureate Malala Yousafzai recalled to the Security Council in a video briefing how she was shot in 2012 by Taliban militants when she was 15 years old for promoting girls' education, a cause she now advocates for globally.