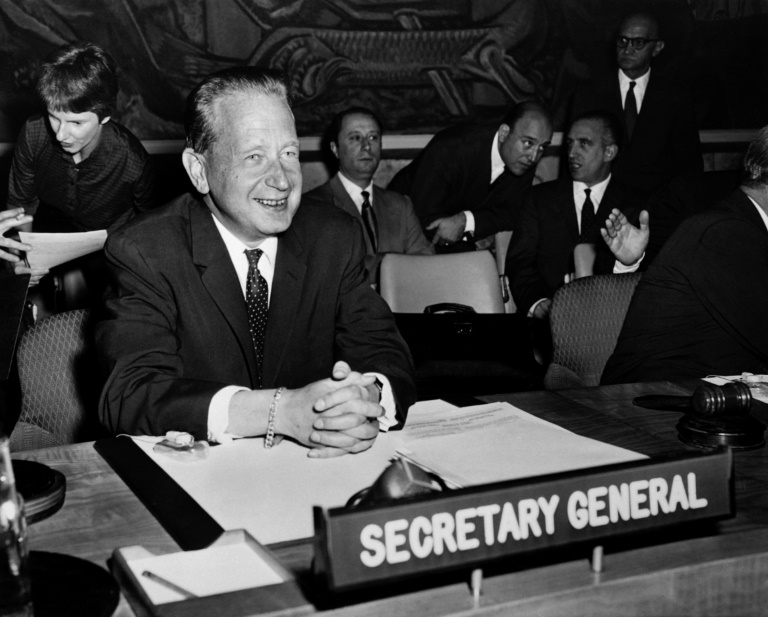 Only the second secretary-general in UN history, Dag Hammarskjold was killed along with 15 others on September 18, 1961 when their plane crashed in what was then known as Northern Rhodesia. (Photo: AFP)

The United Nations General Assembly on Friday approved a resolution extending the investigation into the mysterious 1961 death of secretary-general Dag Hammarskjold.

The Swedish diplomat had been traveling in southern Africa for a mission when his plane crashed.

The text, initiated by Sweden and co-sponsored by more than 100 countries, was adopted by consensus without a vote.

Sweden recommended the reappointment of Tanzanian lawyer Mohamed Chande Othman, who has led the investigation for several years.

In his last report, published in early October, Othman accused the United States and Britain of withholding information regarding Hammarskjold's death.

Only the second secretary-general in the history of the UN, Hammarskjold was killed along with 15 other people on September 18, 1961 when their plane crashed near the city of Ndola in what was then known as Northern Rhodesia, now Zambia.

At the time, he was seeking to unite Congo and stop the mineral-rich Katanga province from seceding.

Two investigations concluded the crash was caused by pilot error. But since 2014, new probes have focused on a possible plot, a theory enforced by Othman's most recent report.

"South Africa, the United Kingdom and the United States must be almost certain to hold important undisclosed information," he wrote.

The resolution urged member states, "in particular those referred to in the report, to release any relevant records in their possession."

In his report, Othman mentioned the likelihood that UN member states intercepted communications related to the crash, as well as the existence of Katangan air assets that could have attacked the secretary-general's plane.

He also cited the presence of foreign forces, including pilots and intelligence agents, on the ground at the time of the crash.