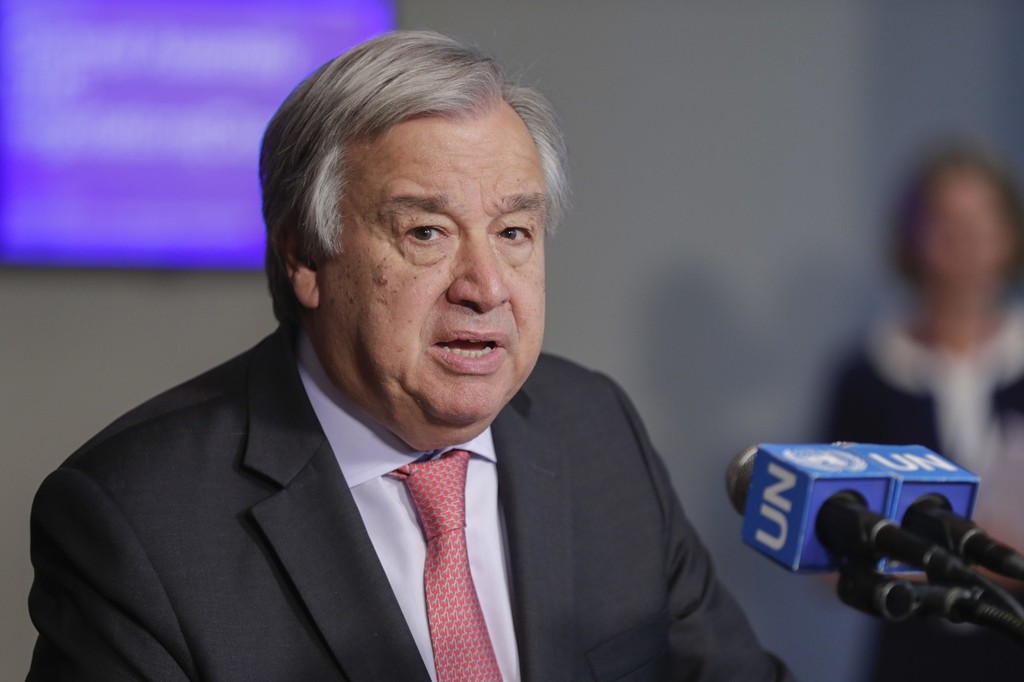 UN Secretary-General Antonio Guterres makes a speech at the UN Headquarters in New York, the US, June 18, 2019. (Photo: IC)

The United Nations' financial crisis is undermining the organization's mandates and reform efforts, according to UN Secretary-General Antonio Guterres, who called on the international community to fully support the organization.

"Despite numerous efforts to contain expenditures this year, we are likely to run out of cash in August and, therefore, borrow from the Working Capital Fund," Guterres told the body responsible for UN budget, earlier this month at the UN headquarters in New York.

Presenting his report on improving the organization's financial situation, Guterres noted the level of arrears at the end of 2018 was $529 million, equivalent to more than 20 percent of the year's assessments. And at the end of May, arrears totaled $492 million.

"We are at a tipping point and what we do next will matter for years to come," he said.

Guterres said even the closed peacekeeping surpluses that they tapped for the first time since 2005 would not be sufficient to cover the deficit.

"Our inability to meet payroll and vendor obligations would have catastrophic impacts for our reputation and business continuity," he emphasized.

Guterres underscored the solution "lies not only in ensuring that all member states pay in full and on time, but also in putting certain tools in place".

He urged member states to put aside political differences and long-standing objections, to recommit to paying their financial obligations on time and in full, and to help solve structural problems that are compounding the organization's liquidity problems.

The UN chief explained that only looking at the organization's overall finances can be misleading, since it has more assets than liabilities but not enough liquid assets.

On the other hand, many of its expenditure is not covered by assessed contributions but by voluntary contributions. "Those areas might have a lot of cash, but we cannot move that cash to the regular budget," he said.

Guterres said non- and late payment of contributions is not the only cause of the liquidity problems. "The structural weaknesses in the budget methodology create a situation in which our expenditures outpace the approved budget level and the collection of contributions," he said.

"It is caused by the effects of currency exchanges, inflation, salary cost standards and the actual vacancy rates that are approved at the end of one year and assessed only in the next, and unfortunately not always fully compensated, as we had last year," he said.

Similarly, additional mandates, which are approved by the General Assembly and the Security Council after the approval of the budget, are assessed only at the beginning of the following year, said the secretary-general. The lag between expenditure and assessment has created a gap almost half the size of the Working Capital Fund. Therefore, "even if all member states pay on time and in full, the United Nations will still face cash problems toward the end of the year", he said.

Describing the UN's budget procedure as "absurd", the UN chief believed it's time for change, and for previously rejected proposals to be considered. These include setting a budget level that would leave his office free to manage resources with full accountability.

Guterres said that the cumulative cash balances of peacekeeping operations are decreasing due to increasing arrears and late payments. The outstanding contributions to active peacekeeping operations amount to $1.5 billion. At the end of May, despite a cash balance of $1.3 billion, which could theoretically cover the operations for about two months, two large missions had cash to cover a mere two weeks of operations, and three missions were already in deficit, according to the secretary-general.

Typically, the organization should have cash for at least three months of each operation. "This puts at risk not only the functioning of our operations but also the people who serve in difficult environments," he said. "Most importantly, it means that we could not reimburse troop- and police-contributing countries, thus defaulting on our obligations to those countries," he added.

The secretary-general's proposed solutions involve setting up a single funding pool for all peacekeeping operations, and the creation of a Peacekeeping Working Capital Fund.

Meanwhile, China will continue to be the second largest contributor, after the United States, to the UN peacekeeping budget for 2019 to 2021. Its share will rise from about 10.24 percent to 15.22 percent.

Fu Liheng, diplomat in charge of administrative and budgetary affairs at China's permanent mission to the UN, told the budget committee in a statement that China, a staunch supporter of the work of the UN, had paid all its assessed contributions on time and in full.

As of April 30, outstanding payments from member states totaled $1.56 billion for the regular budget, $2.27 billion for peacekeeping and $83 million for international tribunals.

He urged countries, particularly those with large outstanding payments, to pay those bills. He also urged the secretariat to tighten its financial discipline as it managed its budget more wisely and efficiently.