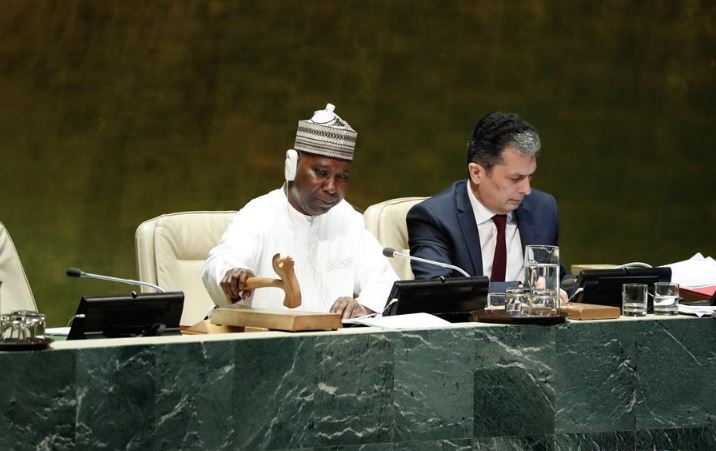 Tijjani Muhammad-Bande (L), president of the 74th session of the United Nations General Assembly, gavels to conclude the General Debate, at the UN headquarters in New York, Sept. 30, 2019. (Photo: Xinhua)

UNITED NATIONS, Sept. 30 (Xinhua) -- This year's General Debate of the UN General Assembly concluded on Monday after representatives of 192 countries spoke at the green marble podium around the theme of "Galvanizing multilateral efforts for poverty eradication, quality education, climate action and inclusion."

In his closing remarks, Tijjani Muhammad-Bande, the president of the current session of the UN General Assembly, said he was impressed by calls for multilateralism and for climate action.

As he listened to speakers, he found the distinct impression that far from being an outmoded principle, multilateral cooperation remained an accepted method of managing relations among nations, Muhammad-Bande said.

The participation of so many world leaders, along with the quality of their engagement at the General Debate, served as indisputable evidence of the strength of multilateralism, he said.

"It is perfectly legitimate to raise questions about the essence of and the need for multilateralism. All the same, even when we disagree on how the world should be organized to respond to or anticipate mounting challenges, we shall eventually come to a common cause on the need for a rules-based international order," he said.

In a highly polarized world, multilateralism is the only guarantee of peace, security and sustainable development, said Muhammad-Bande. "The world will not survive for long unless we cultivate the give-and-take spirit, which is a distinct and defining attribute of multilateralism."

Active participation in the General Debate by 192 of the 193 member states is the clearest indication of the acknowledgment of the interdependence between and among nations, the president said.

Uzbekistan was the only member state that did not speak at this year's General Debate.

Muhammad-Bande commended the enthusiasm of the youth for climate action in this year's high-level week that included a Climate Action Summit convened by UN Secretary-General Antonio Guterres.

"This week, the world's youth made their mark. They marched in the millions all over the world, and quite literally took over the General Assembly at the Climate Action Summit," he said.

"Let me assure you: we hear you. But that 'I hear you' does not mean you should lower the volume. You should continue to make your voice heard at every opportunity you have," he said.

Muhammad-Bande was heartened by the climate action announcements at the summit by member states and the adoption of political declarations on universal health coverage and on Sustainable Development Goals.

He also found it disheartening, however, that only 16 of the 192 speakers for member states at the General Debate were women, although the General Assembly is the most representative body of the United Nations.

"Gender equality in the contemporary world is still work in progress. We, therefore, need to double our efforts to speed up the process, including women not only in decision-making structures, but also in the list of speakers built to address high-level fora," the president said.

The General Debate is the annual gathering of heads of state and government as well as other high-level representatives of UN member states at the beginning of the new session of the General Assembly.

As by convention, Brazil was the first to speak, followed by the United States, the host country. Sri Lanka became the last member state to take the floor this year.