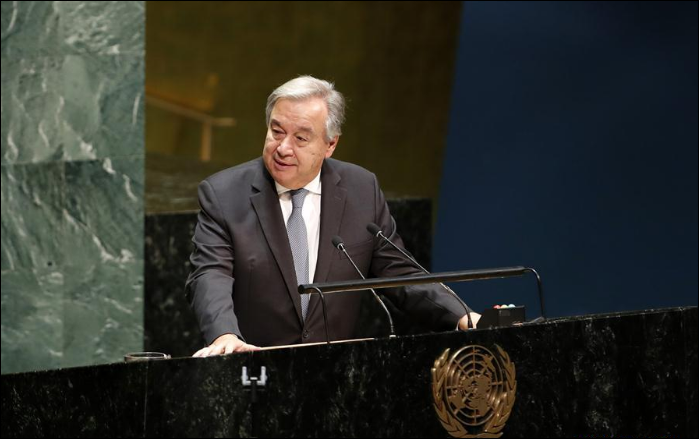 "The United Nations and Kofi Annan (the late UN secretary-general) were inseparable; it is impossible to say where one ended and the other began," the current UN chief, Antonio Guterres, said on Friday.

Guterres led a list of diplomats, staff and family members speaking in the UN General Assembly Hall at a memorial tribute to Annan, a Nobel laureate and native of Ghana who died on Aug. 18 in Geneva after a short illness.

"Kofi Annan was uncommonly warm, accessible and of the people – but above all, he was principled and forceful in battling for the values of the UN Charter," said Guterres. "He was charming and wise, kind and courageous. But he also knew how to deliver the barb – in his masterly subtle way."

"And sometimes, people were so captivated by his presence that they did not realize that they were being admonished!" said Guterres, whom Annan appointed High Commissioner for Refugees in 2005.

But, "Throughout his tenure Kofi Annan urged us never to be bystanders in life," the UN chief said. "He summoned us all to act against bias, brutality and bloodshed."

"He was a multilateralist through and through, a true UN-blue believer in a rules-based global order," Guterres said. "And, I must say, his loss cuts even deeper because we have never needed that faith and inspiration more."

This was a reference to US President Donald Trump's history of snubbing multilateralism for his bilateral approach to international relations.

"Kofi Annan called the United Nations the 'last best hope of humanity'," said Guterres. "He burned with the flame of human rights, dignity and justice."

President Maria Fernanda Espinosa of the 73rd General Assembly session, which just began last week, said it is "eminently fitting that we remember him (Annan) on this day – a day fixed by this Assembly 17 years ago, on his watch and with his strong support, as International Peace Day. For no one labored more tirelessly or consistently in the cause of peace than did Kofi Annan."

"Kofi Annan was a great Secretary-General because he understood that peace cannot be achieved in isolation," she said.