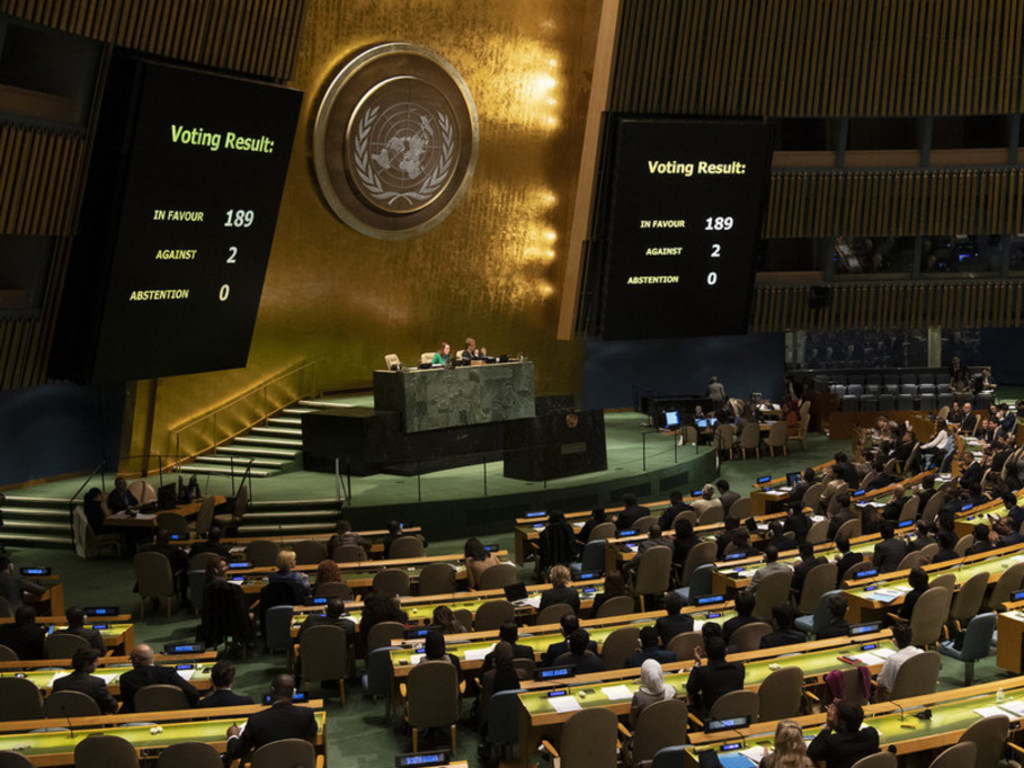 Results of the General Assembly vote on the draft resolution entitled “Necessity of ending the economic, commercial and financial embargo imposed by the United States of America against Cuba." (Photo: UN/Evan Schneider)

New York (People’s Daily) - The United Nations General Assembly has overwhelmingly voted in favor of condemning the United States economic, commercial and financial embargo against Cuba - a call it has made every year since 1992.

A total of 189 UN member states voted in favor, with Israel and the US voting against the resolution, urging all states to “refrain from promulgating and applying laws and measures” which among other things, in the case of the embargo, interfere with the freedom of trade and navigation. There were no abstentions.

The Assembly called upon states “that have and continue to apply such laws and measures to take the steps necessary to repeal or invalidate them as soon as possible.”

Through the resolution, the General Assembly also decided to include the agenda item entitled “Necessity of ending the economic, commercial and financial embargo imposed by the United States of America against Cuba,” in the provisional agenda of next year’s session.

The vote on the resolution is unenforceable, but the Cuban-sponsored resolution shines a spotlight on the relative isolation of the US regarding the embargo, which was first imposed in 1960, when former leader Fidel Castro came to power, following the revolution.

Speaking ahead of the vote, Cuba’s Foreign Minister Bruno Rodriguez Parrilla outlined the impact of the embargo on Cubans, especially due to restrictions on lifesaving medicines. “Incalculable human damage has been caused by the blockade, which is qualified as an act of genocide,” he said.

Before the resolution was adopted, eight amendments, relating to the Sustainable Development Goals, human rights and rule of law, proposed by the US, failed to pass.

Introducing the amendments, US Ambassador Nikki Haley said that the draft resolution “changes nothing” in terms of addressing the problems faced by Cuban citizens. “Our reason for the embargo is and has always been Cuba’s denial of freedom and the denial of the most basic human rights for the Cuban people," she said.

“The US government does not have the least moral authority for criticizing Cuba or anyone else with regards to human rights. We reject the repeated manipulation of human rights with political purposes as well as the double standards that characterize it," Cuba’s Foreign Minister Parrilla responded.

Member states, including China who spoke on the resolution over two days, overwhelmingly called on the US to end the embargo and other punitive measures against Cuba.

National representatives agreed that the nearly six‑decades‑long blockade imposed on the Caribbean island by Washington impeded its right to development and its ability to participate fully in the global economy. They also urged the US to heed the Assembly’s repeated calls to lift its restrictive policies.