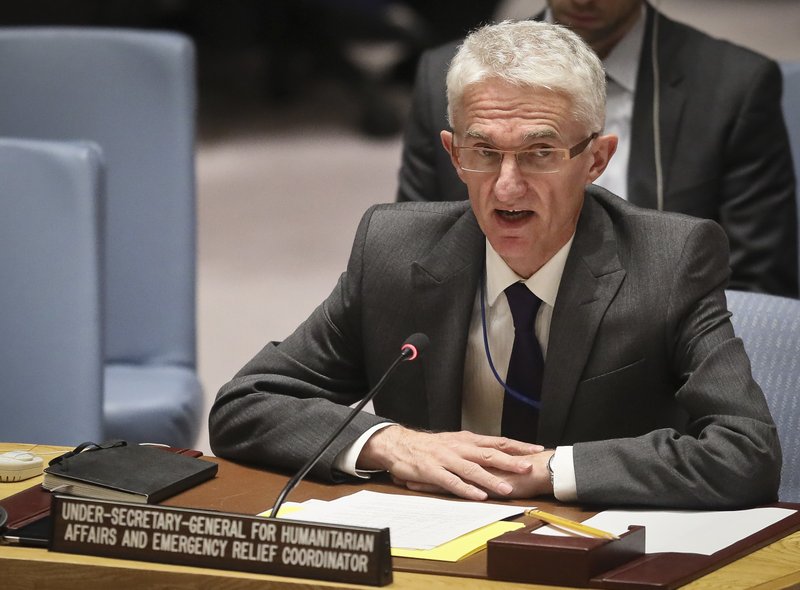 The U.N. humanitarian chief warned Tuesday that “there is a clear and present danger of an imminent and great big famine engulfing Yemen.”

Mark Lowcock told the Security Council that this famine would be “much bigger than anything any professional in this field has seen during their working lives.”

He said “the situation is now much graver” than when he warned of famine in Yemen at the beginning of 2017 and again last November. That is because “of the sheer number of people at risk,” he said.

Lowcock said the U.N. now thinks last month’s estimate that 11 million people could soon face “pre-famine conditions” and need aid to survive was wrong, and the number is actually 14 million — half of Yemen’s population.

The conflict in Yemen, the Arab world’s poorest country, began with the 2014 takeover of the capital, Sanaa, by Houthi Shiite rebels, who toppled the internationally recognized government. A Saudi-led coalition allied with the government has been fighting the Houthis since 2015.

Civilians have borne the brunt of the conflict, which has killed over 10,000 people and sparked the world’s worst humanitarian crisis and a cholera epidemic.

At the beginning of 2017, the United Nations and its partners were able to provide aid to 3 million hungry Yemenis. Since then, assistance has been scaled up, reaching 8 million people in September because of generous funding from donors, Lowcock said, but far below the 14 million people who may need it.

Lowcock said three conditions are required for famine to be declared: At least one in five households faces an extreme lack of food, more than 30 percent of children under age 5 are suffering from acute malnutrition, and at least two out of every 10,000 people are dying every day.

An assessment is now under way across Yemen to measure the risk of famine and initial results are expected in mid-November, he said.

Last month, Lowcock said the food crisis had worsened because of the intensification of fighting around the key port of Hodeida, which is the lifeline for delivery of humanitarian aid and commercial imports that Yemenis rely on, and a “further collapse of the economy.”

Since then, he said, “fierce clashes continue in Hodeida, including intense fighting, shelling and airstrikes in Hodeida City over the last several days.” Clashes have also blocked access to a facility where grain is milled that could feed 3.7 million people for a month, he said.

“Yemen is almost entirely reliant on imports for food, fuel and medicines,” Lowcock said. “And the available foreign exchange — from what little remains of oil exports, from money sent home by Yemenis out of the country, and from international assistance — has been simply inadequate to finance adequate levels of imports to support the population.”

Lowcock recalled that last month he called for “an urgent and substantial injection of foreign exchange, and the resumption of payments to pensioners and key public sector workers like teachers and health professionals.”

He said there have been “constructive discussions” on both issues and welcomed Tuesday’s announcement by Saudi Arabia and the United Arab Emirates of $70 million to cover allowances for 135,000 teachers across Yemen.

“However, I fear, overall, that action in these areas still looks to be both too small and too slow to reverse the trajectory towards famine,” Lowcock said.

He criticized new government regulations requiring traders trying to import six key commodities — wheat, rice, sugar, milk, cooking oil and fuel oil derivatives — to secure lines of credit from Yemen’s Central Bank. “But only a handful of lines of credit have been issued since June, mostly in just the last few days,” he said.

The government has announced it intends to extend the new regulations to food imports starting Nov. 9.

“Unless steps are taken to expedite the process or waive the new requirements, imports of key food commodities and fuel could, we assess, fall by half,” Lowcock said. “That would ... be the death knell for countless innocent civilians, most of them women and children.”

Lowcock called for a humanitarian cease-fire around key aid facilities, delivery of humanitarian and commercial imports to all ports and onward to their final destinations, increased funding to scale up relief efforts, and a larger and faster injection of foreign currency and expedited credit for traders and payment to pensioners and civil servants.

“With so many lives at stake,” he said, the warring parties need “to seize the moment” and engage with the U.N. envoy for Yemen “to end the conflict.”