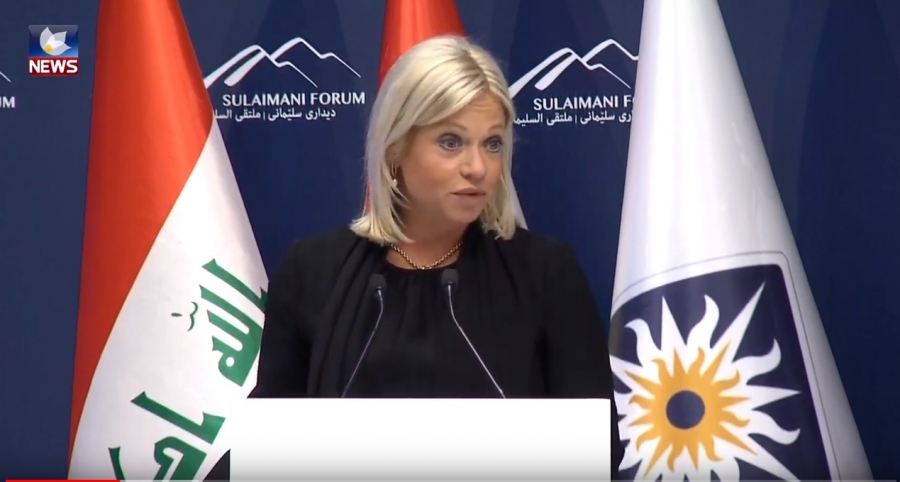 BAGHDAD, May 3 (Xinhua) -- The United Nations Assistance Mission for Iraq (UNAMI) said on Friday that more than 1.6 million Iraqis remain displaced despite the military defeat of Islamic State (IS) militants since late 2017.

The remarks came in a statement by UNAMI after the visit of the Special Representative of the Secretary-General for the UNAMI Jeanine Hennis-Plasschaert to the Iraqi provinces of Nineveh and Dohuk to assess the situation of Internally Displaced Persons (IDPs).

Hennis-Plasschaert visited Hassan Sham IDPs Camp and met with the camp's management and residents, who "explained the problems they face in their daily lives as well as the obstacles that prevent them from returning to their hometowns," the statement said.

She also met with Governor of Dohuk Farhad Atrushi to discuss the challenges that the provincial government is facing to continuously host large numbers of IDPs, many of whom are Yazidis, who fled their homes in Sinjar area, some 100 km west of Mosul, according to the statement.

It said that Yazidis are facing "a range of serious obstacles to their return to home such as an unstable security situation including clashes between armed groups and checkpoint harassment, damaged and contaminated houses, inadequate basic services, as well as discrimination."

"Obstacles are varied and often complex, painfully resulting in stalled returns on the ground," the statement quoted Hennis-Plasschaert as saying.

"The Yazidis have suffered immensely during the reign of Daesh, who committed untold atrocities in their attempt to annihilate the community," she said.

"I was shocked to see that now, nearly five years after the capture of Sinjar by Daesh and the area's subsequent liberation, many people are still living in tents, on the very mountain top they fled to at the onset of the terror campaign," she said.

She warned that continuing failure in removing obstacles of returning the IDPs to their homes creates the perfect breeding ground for a new wave of violence and instability, according to the statement.

To avoid the return of violence and instability, she called on the Iraqi federal government and the government of the semi-autonomous region of Kurdistan to "consult with the local leadership in Sinjar and to establish stable governance and security structures without delay," it added.

In December 2017, Iraq declared full liberation from the IS after the security forces and the paramilitary Hashd Shaabi units, backed by the anti-IS international coalition, recaptured all areas once seized by the extremist group.