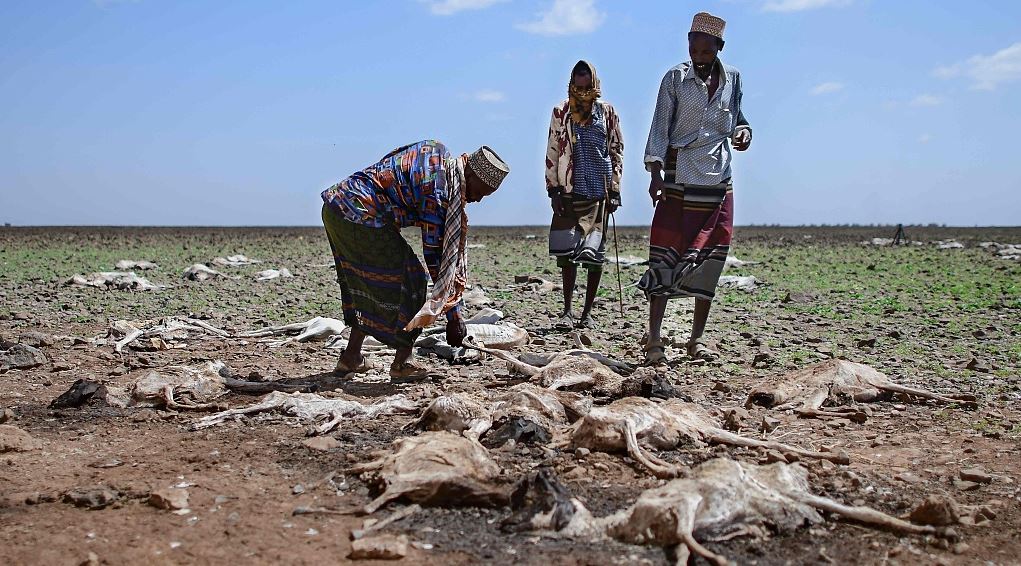 Pastoralists counting losses with the carcasses of their livestock strewn all over the place in Somalia. /Xinhua

The United Nations humanitarian agency said Friday it's seeking 993.3 million U.S. dollars to provide life-saving and life-sustaining assistance to prevent famine and respond to the drought in Somalia by December.

The UN Office for the Coordination of Humanitarian Affairs (OCHA) said the impact of the drought and increasing economic pressures are deepening the severity of needs and driving the country to the brink of famine.

"Nearly 50 percent of the population -- 7.7 million people -- require some form of humanitarian or protection assistance, of whom 7 million are estimated to be affected by the drought," the OCHA said in its latest drought response and famine prevention plan which covers May to December. "The drought has devastated the lives and livelihoods of the most vulnerable, and marginalized people, including women, children, and minority clans. Acute malnutrition in children is on the rise."

Four consecutive failed rains have caused the country's worst drought in 40 years and left millions on the brink of the first famine anywhere in the world for five years.

The UN body said the March-May 2022 rainy season has not materialized and is likely to be the driest on record, devastating livelihoods and driving sharp increases in food, water, and nutrition insecurity.

According to the OCHA, 1.5 million children under age 5 and more than 250,000 pregnant and lactating women (PLW) are currently in need of nutrition support.

"Poor sanitation and communicable diseases, including cholera and measles outbreaks, have resulted in 16 confirmed deaths and left thousands of people sick this year," the OCHA said.