New York (People’s Daily) — On January 11, the United Nations Postal Administration (UNPA) continued its Chinese Lunar Calendar series with the issuance of a special event sheet celebrating the Year of the Pig. This is the tenth sheet issued for UNPA’s Lunar New Year stamp series. 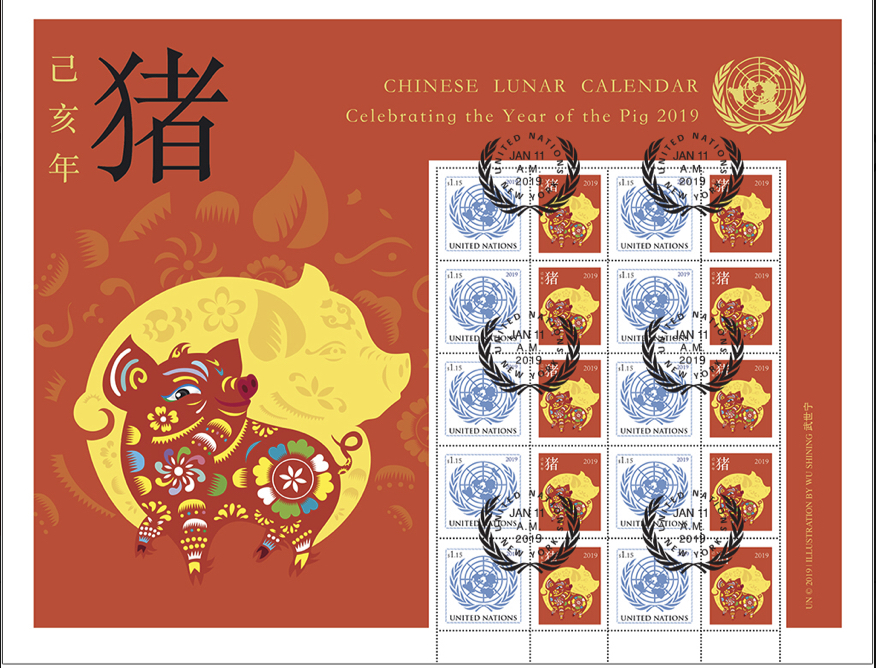 (Photo: screenshot of the website of United Nations Postal Administration)

According to UNPA, the sheet is composed of ten $1.15 denominated stamps with the United Nations logo. The tabs of the stamps and background are the image of the Year of the Pig. This image of the zodiac continues the tradition of the United Nations "Chinese Lunar Zodiac" series of stamps, with red and gold as the main color, and Chinese paper-cutting as the artistic inspiration. The designer is Wu Shining, a special designer from China Post.

The idea of the United Nations issuing its own stamps was first proposed by Argentina in 1947. Human rights, the environment, endangered species and peace are all subjects of universal concern to the peoples of the world. They are also the subjects which UNPA has promoted on its stamps.

Because United Nations stamps reflect the work of the world organization, the stamps extend beyond the boundaries of philately to draw attention to significant world problems and to serve as a reminder of the UN’s commitment to its goals.

Similar postal agreements were reached with the Swiss and Austrian postal authorities.

On December 11, 1968, an agreement between the United Nations and the Swiss Postal Telephone and Telegraph Enterprise enabled the Geneva office of UNPA to issue the first UN stamps in Swiss francs on October 4, 1969.

A similar agreement with the Austrian government on June 28, 1979 enabled the Vienna office of UNPA to issue the first UN stamps in Austrian schillings on August 24, 1979.

The United Nations is the only organization in the world which is neither a country nor a territory that is permitted to issue postage stamps. It is also the only postal authority to issue stamps in three different currencies, namely US dollars, Swiss francs and Euro.

United Nations stamps are issued simultaneously at UN offices in New York, Geneva and Vienna. Each issue carries a related design theme, with different denominations for each office. Since its creation in 1951, UNPA has issued over one thousand stamps.