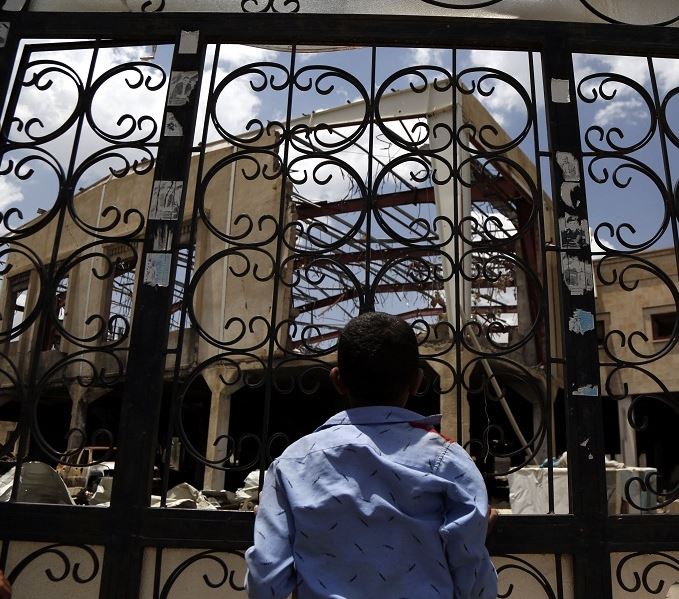 A boy stands in front of a building destroyed in airstrikes in Sanaa, Yemen, on Sept. 5, 2018. (Photo: Xinhua)

GENEVA, Sept. 8 (Xinhua) -- After two days of delay because of the absence of Houthi delegation, one of the major warring parties to the conflict in Yemen, the new round of the UN-led peace talks collapsed on Saturday.

The UN Special Envoy for Yemen Martin Griffiths told a press conference in Geneva that the UN finally failed to manage to get the Houthi delegation to the talks.

Stressing that the UN will sooner or later bring the parties together, Griffiths said that actually the Houthi delegation were keen to travel to Geneva for the peace talks, and he doesn't take this as a "fundamental blockage" in the political process.

"They would have like to get here, we didn't make conditions sufficiently correct to get them here," Griffiths said, adding that it was "too early to say when next round of consultations will take place".

However, he did not go into details on why the Houthi delegation did not show up.

Media reports from Sanaa said that the Houthis will not join peace talks in Geneva until their minute conditions are met, while another report said that the Houthi delegation was just stranded in Sanaa because the Saudi-led coalition, which controls the airspace, had not given their permission to fly.

"The consultation process has started. We had 3 days of fruitful discussions with the delegation of the government of Yemen as planned, and the consultations will continue in Muscat and Sanaa," the UN envoy said, adding that he will travel to the region in the coming days.

According to the envoy, during the past days he held positive discussion with the government of Yemen delegation, which arrived in Geneva on Wednesday. He also met with a number of diplomats from both regional and international powers.

"The environment for discussions is fairly positive, despite what's happening on the ground and despite the fact that we did not of course get the opportunity to receive the Ansarullah (Houthis) delegation," he said.

"We will have similar consultations with Ansarullah," he added.

Earlier on Wednesday, Griffiths announced that warring parities in Yemen had agreed that the time has come to restart the political process and were scheduled to kick off a new round of peace talks in Geneva on Sept. 6.

The envoy said at this stage the parties will mainly discuss the framework for negotiations and relevant confidence-building measures so as to move the process forward.

The last UN-backed peace negotiations for Yemen was held in 2016 in Kuwait, which continued for several months in the Gulf country but no constructive results had been reached due to serious differences between the rival parties.

Yemen has been locked into a civil war since the Houthi rebels overran much of the country militarily and seized all northern provinces, including capital Sanaa, in 2014.

Saudi Arabia is leading an Arab military coalition that has intervened in the Yemeni war since 2015 to support the Yemeni elected government of exiled President Abd-Rabbu Mansour Hadi.