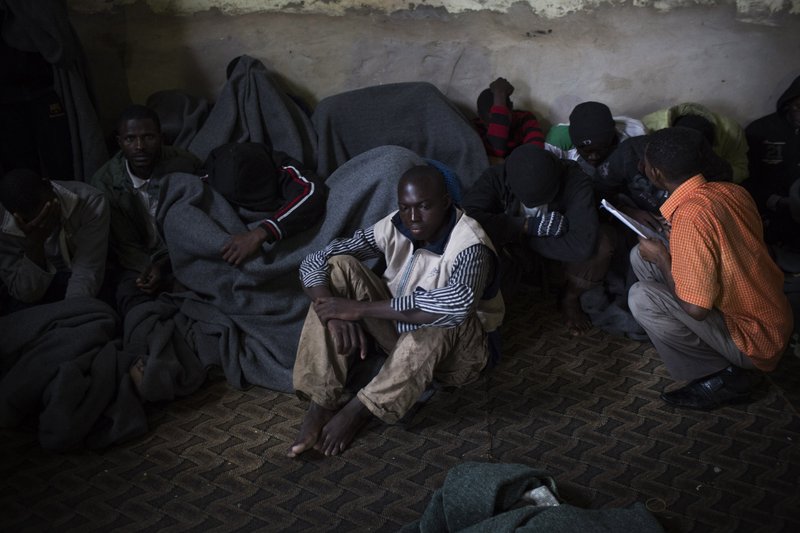 In this Nov. 29, 2013, file photo, African migrants cover themselves with blankets after being captured by the Libyan Coast Guard while on a boat heading to Italy, in a detention center for illegal migrants in Abu Salim district on the outskirts of Tripoli, Libya. (Photo: AP)

The United Nations center in Libya was opened as an “alternative to detention,” a last, safe stop for migrants before they were resettled in other countries. Now, just a year later, it looks increasingly like the notorious Libyan lockups it was supposed to replace.

The facility is jam-packed with nearly 1,200 migrants — about twice the number it was built for — including hundreds who fled from abuse at other detention centers in hopes of sanctuary. Dozens of patients with tuberculosis languish in a room crammed with mattresses. Sewage is overflowing, and armed guards from a local militia have effectively turned the center into a prison.

Unable to cope, the UN last week offered migrants the equivalent of $112 each to leave, and warned that food, already down to emergency rations, would be cut off on Jan. 1 for unapproved arrivals.

“This is very dangerous because among us there are people who are malnourished,” said a 27-year-old Sudanese man who arrived at the center in July. “If they cut food, they won’t be able to stand it.”

This story is part of an occasional series, “Outsourcing Migrants,” produced with the support of the Pulitzer Center on Crisis Reporting.

He, like the rest of the nearly dozen migrants who spoke with The Associated Press from the compound, asked to withhold his name because of fears of retaliation. Libyan security officials and UN and other aid workers confirmed that the UN had lost control of the facility.

The conditions at the center underscore the predicament the UN finds itself in over migration. The UN has criticized the detention of migrants in Libya - a position it reiterated last month when Italy suggested the UN High Commissioner on Refugees run more centers as a solution to rampant abuse in Libyan prisons.

“UNHCR does not and will not run places of detention in Libya,” its spokesman, Charlie Yaxley, told the AP.

Yet that is effectively what the Tripoli facility has become.

“It’s not the best possible scenario,” acknowledged Jean-Paul Cavalieri, the head of the UNHCR in Libya.

Cavalieri lamented the chaos that has accelerated as migrants, acting on their own, escape other detention centers with torture, rape, slave labor and trafficking to what they hope will be UN protection. He said the UNHCR is glad they are free of detention but cannot handle them at its center, known as the Gathering and Departure Facility, where people supposed to be there for days now spend months, stuck in a bureaucratic limbo.

“What we are trying to do now is to turn the loss of the GDF as a transit center into an opportunity,” Cavalieri said, but he struggled to articulate how. Cavalieri also said there are fears of possible abuse at the UN center, including of young girls. UN staff now spend just four hours a day in the compound, migrants and Libyan officials say.

In a statement after the AP story ran, Vincent Cochetel, UNHCR Special Envoy for the Central Mediterranean, said no one was being forced to leave the center, but “the situation is very tense.” UNHCR said 20 people agreed to leave Friday.

“We need the GDF (this transit centre) to function again as it was designed for the most vulnerable and most at risk refugees in detention, pending their evacuation out of Libya,” Cochetel added.

The dilemma has grown out of Europe’s outsourcing of migration to Libya. Europe has poured nearly 425 million euros into Libya since 2016 to keep migrants from reaching its shores — money that goes mostly to the UN and other aid agencies to improve conditions for migrants and Libyans displaced by the country’s civil war. The UN runs a vast operation within Libya, registering 40,000 refugees and asylum seekers, with about 6,000 inside the detention system and the rest ensconced in communities in Tripoli and beyond.

But dependence upon European funding and its increasingly restrictive migration policies have left the UN in the uncomfortable position of being the arbiter of horror stories. It is the UN’s job to decide who has suffered enough to get a coveted resettlement slot in another country.

Many end up waiting months, sometimes years — often in other detention centers — to find out their fate. The UN is now threatening to suspend asylum cases altogether for unauthorized migrants who refuse to leave its GDF facility.

The facility, like the UNHCR mission in Libya itself, was funded largely by European countries. The idea was that it would be operated by UNHCR, with cooperation from the Libyan government.

The situation was less than ideal from the outset, Cavalieri acknowledged. Delayed by months of negotiations, UNHCR ultimately agreed to a series of conditions from the Libyan government: armed guards within the compound and Interior Ministry militia at the gates, no freedom of movement for the refugees and asylum seekers, and a single Libyan “partner” for the various lucrative contracts inside.

Those conditions were never publicly spelled out. When the first group of refugees was resettled from the facility in December 2018, the UNHCR described it as “the first centre of its kind in Libya,” and said it was “intended to bring vulnerable refugees to a safe environment” while solutions were found. More than 2,300 people have passed through in the past year.

The influx of unauthorized migrants began in July, when an airstrike hit a detention center in Tripoli, killing 54. Survivors walked through the city to the UN center and, once the guards admitted them, they refused to leave.

The latest group to arrive, in late October, included more than three dozen tuberculosis patients among several hundred who walked out of Abu Salim detention center, where they had been imprisoned for the last year without regular meals. Those whose families could spare money paid guards to buy them food; others went hungry.

UN officials at the center told the new group, mostly men from sub-Saharan Africa, that there would be no resettlement unless they left — either for another detention center or for the streets of Tripoli. They were given bread and water, and UN officials said they had no control over what happened next, according to two Eritrean asylum-seekers. That would be up to the commander of the armed guards at the gates.

The Eritreans, whose government is considered among the world’s most repressive, refused to leave. They also refused to discuss returning home when an Eritrean diplomat unexpectedly showed up at the invitation of a UN migration official, according to the asylum-seekers. His arrival forced them to face a representative of the very government from which they are seeking asylum.

The tuberculosis patients, meanwhile, are being treated on-site in a crowded room of their own. They receive medicine from the UN But the pills are supposed to be taken on a full stomach, and instead the patients are making do with the same biscuits, bread and water they all have subsisted on since their arrival.

Most of the migrants at the UN center fled from worse and are torn between relief and fury — relief to have escaped Libya’s prisons alive, and fury at the impotence of the UN, which they say lacks either the will or the power to make any meaningful decisions about their future, inside the center or out.

“I hate these organizations. They don’t have any humanity,” said a 15-year-old Eritrean who survived the airstrike, fled to the UN facility, and is waiting to learn what will happen to him. His group is not allowed outside because they speak no Arabic and are targets for kidnapping. There are no resettlement slots available other than Libya.

“What shall we do?” he asked. “We have no options but to stay. Is there any news?”

The last thing most of those the AP interviewed want is to be turned out into Libyan cities, which are dangerous for everyone — Libyans and foreigners alike — but especially for migrants. They are considered ripe for kidnappings for ransom and for arrest by Libyan authorities who return them to the same detention centers they fled. So migrants inside see few alternatives to their new prison — it’s better than the old one or the streets.

“You are not allowed out because it’s like you are at the very last stage. You are almost outside Libya. It’s for your own safety,” said Khaled al-Marghani of LibAid, the Libyan group that operates the facility. “If you leave, I won’t be able to let you back in.”

Hardly anyone seemed eager to accept the latest offer, which the UN said came with guarantees from the Libyan government that they would not be re-arrested on the streets. But it is militias that run the streets, and not the central government.

One Sudanese migrant did agree to leave, seeing little alternative. He said he’ll now try to cross to Europe by sea before he is swept up in a Libyan raid to detain migrants.

“Instead of living in Tripoli and getting tortured, the sea is less torturous,” he said.

At a hearing late last month before members of the European Parliament, Annabelle Roig Granjon, a senior officer with UNHCR, fielded questions about how European funds were helping migrants inside Libya, especially in the center that opened a year ago to so much hope.

“The nature of the center, which was meant to be a transit center, is changing and this is a challenge right now,” she said. “What was meant to be an alternative to detention is turning into something else.”