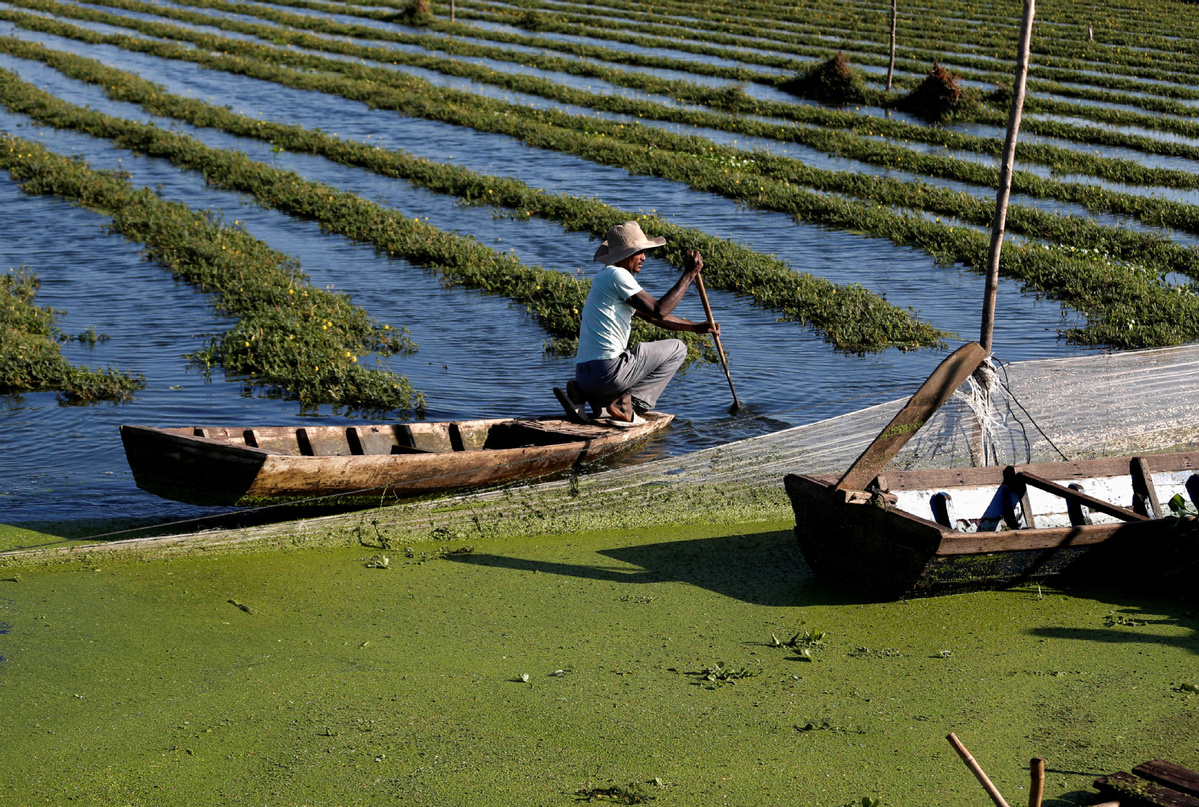 A man rows his boat to collect vegetables on a lake on the outskirts of Phnom Penh, Cambodia, on Dec 6, 2019. (Photo: Agencies)

BANGKOK — Nearly a half-billion people in the Asia-Pacific are still malnourished and eliminating hunger by 2030 requires that millions escape food insecurity each month, according to a report released Wednesday by UN agencies.

Data compiled by the United Nations show slow progress and even backsliding in the areas of child wasting and stunting and other problems related to malnutrition. Worsening inequality means that despite relatively fast economic growth, incomes in the region are not increasing fast enough to help ensure adequate, nutritional diets for hundreds of millions still living in poverty, it says.

The report urges that governments combine efforts to end poverty and with nutrition, health and education-oriented policies. The UN's sustainable development goals for 2030 call for ending hunger and ensuring all people have adequate access to food all around the year.

"We are not on track," said Kundhavi Kadiresan, the FAO's regional representative. "Progress in reducing undernourishment has slowed a lot in the past few years."

More than a fifth of all people in the Asia-Pacific region are facing moderate to severe food insecurity, meaning they must scrimp on food or go hungry part of the year, and in the worst cases go days without eating.

More than half of the 479 million in the region who are undernourished live in South Asia, where more than a third of all children suffer from chronic malnutrition, said the report written by the Food and Agriculture Organization, UNICEF, the World Food Program and the World Health Organization.

In India, nearly 21% of children suffer from wasting, a more acute form of malnutrition.

Failing to ensure children are well nourished jeopardizes their future development, especially their cognitive abilities — a crucial handicap in the 21st century age of advanced technologies, said Michael Samson, research director of the Economic Policy Research Institute, who spoke at the report's release in Bangkok.

Cognitive abilities cannot be traded or manufactured, so "Investing in the first 1,000 days (of a child's life) is the most important investment you can make in future productivity," he said.

Governments have begun to implement some policies aimed at addressing the severe shortfalls in child and maternal nutrition. Thailand has provided subsidies that have helped improve the health and diets of families with young children. In neighboring Myanmar, trial programs in the Chin state are being expanded to cover more of the country.

The focus is not just on providing cash, but improving awareness about nutrition, family planning and water and sanitation," said Shein Myint, an assistant director in the Social Protection section of Myanmar's Ministry of Social Welfare.

"From monitoring we see that beneficiaries mainly use the cash to have nutritious food and use it for healthcare costs," Shein Myint said.

Cambodia is expanding a program called NOURISH that originally was funded by the US Agency for International Development. It provides help for impoverished pregnant women and families during the first 1,000 days of a baby's life. In areas where the program was implemented there was a nearly 20% decrease in stunting and marked improvement in toddlers' diets, said Laura Cardinal, who directed the program.

While many in Asia still do not get enough calories to thrive, in the Pacific the problem is too many empty calories: obesity rates in the Pacific islands are among the world's highest and rising fast, partly because healthy foods are costly and less available and partly because local cultures focus much on feasting, said Lu'isa Manuofetoa, the acting chief executive for Tonga's Ministry of Internal Affairs.

"People like to have feasts all the time, that's something we need to change," she said.