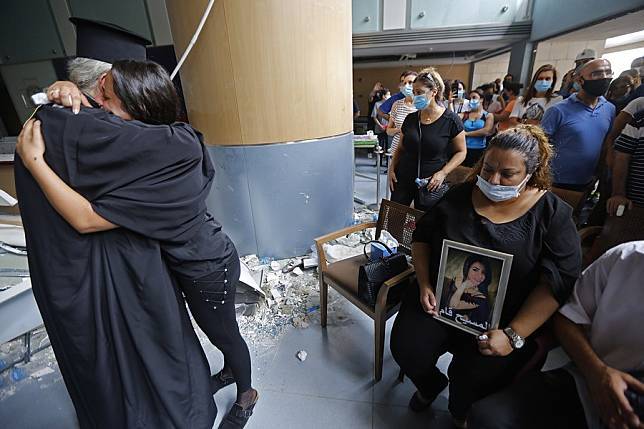 People mourn for a victim of explosions in a hospital in Beirut, Lebanon, on Aug 6, 2020. (Photo: Xinhua)

Already $9 million in emergency aid have been released locally for hospitals and the UN Office for the Coordination of Humanitarian Affairs (OCHA) is expected to release additional funds soon, said Farhan Haq, deputy spokesman for UN Secretary-General Antonio Guterres.

The World Health Organization reported three hospitals are inoperable and two more have sustained substantial damage, the spokesman said. The equivalent of 500 hospital beds has been lost due to damage.

A special international appeal for additional funds is also anticipated, the spokesman told correspondents at a regular, virtual briefing.

Haq said the United Nations will follow up "to make sure that all of the aid that we distribute goes to where it's needed."

The OCHA is sending emergency teams that include experts from the International Search and Rescue Advisory Group and UN Disaster Assessment and Coordination team to assist with the emergency response.

"We do have teams who are specialists in search and rescue who are on the ground for the current phase, which involves trying to find the people who are still missing following the blast," he added.

About 100 people have been reported missing. More than 130 Have been killed.

"With the Beirut Port inoperable, the UN and its partners are looking to adjust logistic networks to ensure sustained operations," Haq said. "Humanitarian materials will likely be redirected through the Tripoli Port."

The port in the north of the country is a little more than 80 kilometers north of Beirut.

"The change may have adverse consequences for some supply chains, as Tripoli Port has a lower capacity than Beirut Port," he said. "Beirut International Airport remains open for passenger and cargo flights."

"We are, in fact, exploring using alternative ports in the short term, including in places like Cyprus and Turkey, to make sure that we can get aid to Syria efficiently while Beirut Port is being repaired," he said.

The leadership of the UN Mission in Lebanon (UNIFIL) visited the Maritime Task Force ship that was damaged in the explosion on Tuesday and visited the injured peacekeepers from the vessel who were injured in the blast, the spokesman said.

A total of 23 UNIFIL peacekeepers from Bangladesh had been admitted to hospitals, of whom 18 have been discharged, he said. Two peacekeepers remain in critical but stable condition.