The U.N. representative in Sri Lanka said the sinking of a container ship that caught fire while transporting chemicals off the capital Colombo has caused “a significant damage to the planet” by releasing hazardous substances into the ecosystem. 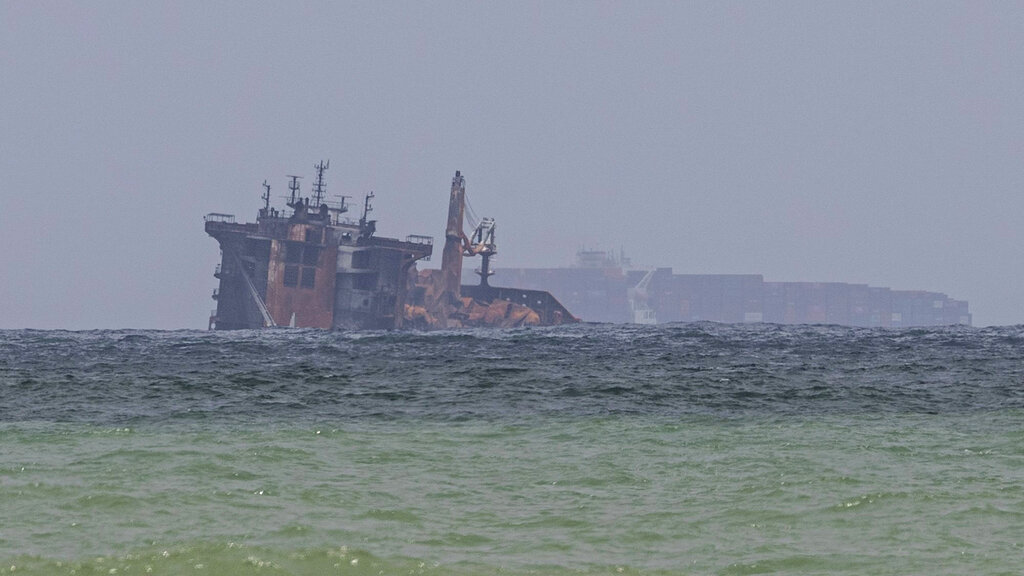 In this Friday, June 4, 2021, file photo, the fire-damaged container ship MV X-Press Pearl is seen partially sunk where it is anchored off Colombo port at Kapungoda, Sri Lanka. (Photo: AP)

The Singapore-flagged X-Press Pearl sank off on Thursday a month after catching fire, raising concerns about a possible environmental disaster.

The U.N. said it was coordinating international efforts and helping Sri Lanka in assessing the damage, recovery efforts and preventing such disasters in the future.

“An environmental emergency of this nature causes significant damage to the planet by the release of hazardous substances into the ecosystem,” U.N. Resident Coordinator in Sri Lanka Hanaa Singer-Hamdy said in a statement late Saturday. "This in turn threatens lives and livelihoods of the population in the coastal areas.”

A U.N. team of oil spill and chemical experts— provided by the European Union— has been sent to Sri Lanka.

Sri Lanka has already submitted an interim claim of $40 million to X-Press Feeders to cover part of the cost of fighting the fire, which broke out on May 20 when the vessel was anchored about 9.5 nautical miles (18 kilometers) northwest of Colombo and waiting to enter the port.

The Sri Lankan navy believes the blaze was caused by its chemical cargo, which included 25 tons of nitric acid and other chemicals, most of which were destroyed in the fire. But debris including burned fiberglass and tons of plastic pellets have already polluted nearby beaches.

A ship manifest seen by The Associated Press said the ship carrying just under 1,500 containers, with 81 of those described as “dangerous” goods.

The main concern has been about 300 tons of bunker oil used as fuel for the ship. But officials have been saying it could have burned off in the fire.

Both Sri Lankan authorities and the ship’s operator, X-Press Feeders, have said so far there is no sign of an oil spill.