UNITED NATIONS, Aug. 24 (Xinhua) -- UN officials and representatives of member countries on Tuesday noted that escalating conflict and a deepening economic crisis have pushed humanitarian needs to the highest levels in Syria, as the Security Council met on the situation in the war-torn country. 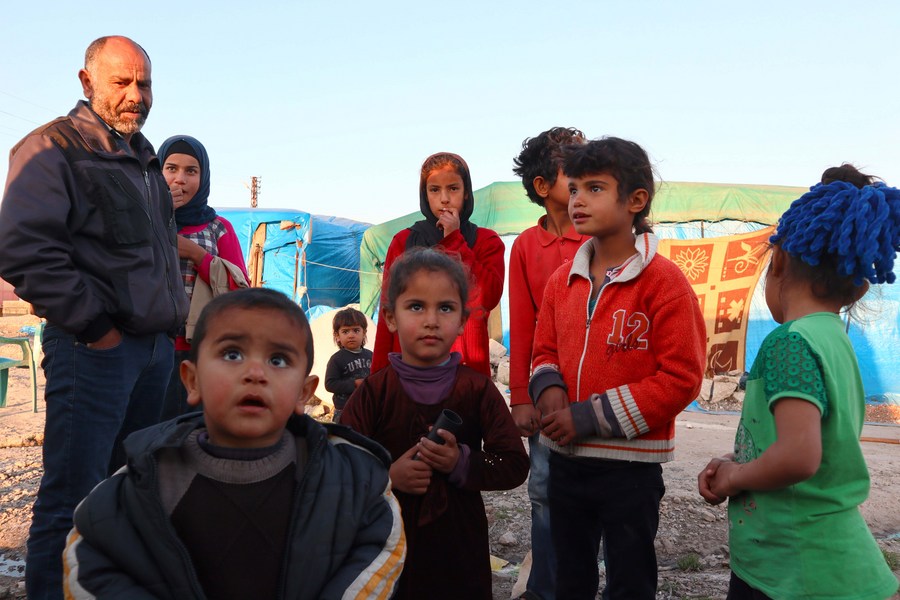 Refugees from Syria are seen at a temporary settlement in Hatay, Turkey, on Feb. 26, 2020. (Photo: Xinhua)

UN special envoy for Syria Geir O. Pedersen stressed the importance of "an immediate end" to the violence, as he drew attention to the heavy shelling and ground clashes in Syria's southern province of Daraa.

Tensions are also high in northwestern Syria, including Idlib, northern Latakia, Aleppo and western Hama, he said, calling on the parties to abide by international humanitarian law and highlighting the importance of "averting further displacement."

He urged key states, including Russia and the United States, to work with him in exploratory discussions on a package of concrete, reciprocal steps to help save Syrian lives.

Humanitarian needs in Syria are "at the highest levels" since the start of the conflict, the UN humanitarian chief said.

Amid increasing air strikes, he said, high commodity prices and widespread loss of livelihoods have forced more and more households to reduce meals and even resort to early marriages.

He also drew attention to the water crisis, due to critically low water levels in the Euphrates River flowing into Syria from Turkey.

In addition to impacting drinking water, irrigation and electricity, the water crisis is damaging to public health at a time when COVID-19 infection rates remain high and available vaccines are insufficient, he said.

The Security Council also heard from Khaled Erksoussi, secretary general of the Syrian Arab Red Crescent, who echoed the need to resolve the water crisis in northeastern Syria, which has deprived 1.1 million people of drinking water due to a lack of power at the Alouk water station.

These facilities are used as a bargaining chip between the conflict parties, he said.

Describing the toll taken by sanctions, he stressed that their consequences on ordinary Syrians, already ravaged by violence, exceed any political objectives.

In the ensuing debate, Bassam Sabbagh, the permanent representative of Syria to the United Nations, stressed the importance of lifting the unilateral economic measures against his country, citing their catastrophic impact on the humanitarian situation, especially on food and fuel deliveries.

Calling for greater focus on recovery and infrastructure projects, he described cross-border delivery as a "failing mechanism" and a waste of resources.

Zahra Ershadi, Iran's deputy permanent representative to the United Nations, echoed the call for "the immediate lifting of all unlawful sanctions against Syria," and an improved cross-line humanitarian assistance.

There is a lack of transparency in cross-border humanitarian assistance, she said, adding that all uninvited foreign forces must leave the country without any precondition or delay.

Russian UN ambassador Vassily A. Nebenzi called upon the UN special envoy to facilitate dialogue towards the Constitutional Committee process, rather than "bogging it down with artificial preconditions and deadlines," saying that Syria's government has every right to monitor the upholding of law on its own sovereign territory.

He also emphasized the need for a rapid transition from emergency assistance to a large-scale recovery and the reconstruction of infrastructure.

Geng Shuang, China's deputy permanent representative to the United Nations, recalling that 2021 marks 10 years since the crisis in Syria began, called upon the parties to expedite the process towards inclusive dialogue, in order to bridge differences and find political solutions.

The United Nations should continue to work as the main channel of mediation, he added.

Encouraging the international community to support the work of the Constitutional Committee, he emphasized that the body should be independent and free of foreign interference.

Geng further stressed the importance of stabilizing the security situation and combating terrorism amid escalating clashes in the northwest, northeast and south, particularly since foreign troops and Israeli missiles have heightened tensions.

Expressing concern over the humanitarian impacts of COVID-19, rising food prices, oil shortages and the water crisis affecting 460,000 residents in northeastern Syria, he called for the lifting of unilateral sanctions against Syria and for increased humanitarian assistance without delay.