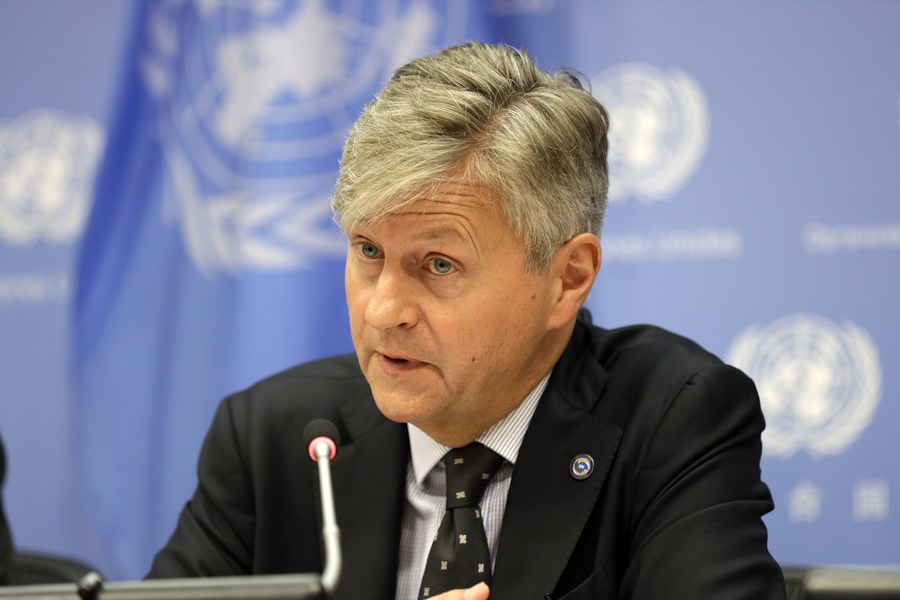 Jean-Pierre Lacroix, UN Undersecretary-General for Peace Operations, speaks at a press conference on the occasion of the International Day of UN Peacekeepers at the UN headquarters in New York, May 24, 2019. (Photo: Xinhua)

Dujarric told reporters at the regular noon briefing that the diagnosis was made while Lacroix was in Portugal, where he was scheduled to attend a meeting on Security Council Resolution 1325.
"As soon as he received a positive result, he notified local authorities and isolated himself in Lisbon. He is asymptomatic and will remain isolated for the required number of days as per standard medical guidance. Contact tracing was immediately implemented accordingly," said the spokesman.
"We are grateful for the Portuguese Government for their testing and logistical support. Mr. Lacroix is in fine spirits, as I can report," Dujarric added.
Speaking of contact tracing, Dujarric said that Lacroix was last in the UN headquarters in New York "more than a month ago."
"As you know, he had been on a trip to Africa. I think he'd been in Ethiopia and Central African Republic, to name a few, with his counterpart in the African Union, Smail Chergui, and so we've been in touch with the African Union," he said.
"All the contact tracing has been done... He has not physically seen the secretary-general in more than a month," said the spokesman, adding that the UN peacekeeping chief "had been planning to go back to Africa to a number of peace operations, and those trips have been postponed."
The UN peacekeeping chief said earlier on Twitter, "I've tested positive for #COVID19. I'm asymptomatic and isolating in Lisbon, working remotely."
"Contact tracing was immediately implemented. My thanks to Portuguese Govt for testing & logistical support and to everyone for their messages of support," Lacroix added on Twitter.
Guterres expressed on Twitter his wish of "a swift and complete recovery" for Lacroix.
"As we continue our fight against the virus, let's keep supporting each other," said the secretary-general.