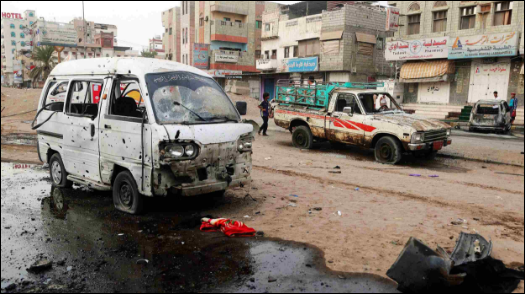 People walk past damaged cars at the entrance of Al Thawra hospital after an air strike in the Red Sea town of Hodeidah on August 2, 2018. (Photo: VCG)

The United Nations will invite warring sides in Yemen for talks on September 6 in Geneva, Switzerland to discuss a framework for peace negotiations, the UN's special envoy for the war-torn country announced on Thursday.

Martin Griffiths told the UN Security Council that "a political solution" to end the war in Yemen was "available" and urged world powers to support the new push for peace negotiations.

"These consultations will provide the opportunity for the parties, among other things, to discuss the framework for negotiations, relevant confidence-building measures and specific plans for moving the process forward," said Griffiths.

The UN announcement came as the Saudi-led coalition denied responsibility behind the air strikes on a fishing port and fish market that Yemeni medical sources said killed 26 people in the Red Sea port city of Hodeidah on Thursday.

Earlier the International Committee of the Red Cross said on Twitter it was sending medical equipment to Al Thawra Hospital to treat 50 people in critical condition following the attack.

The hospital said in a tweet a strike targeted its main gate, leaving dozens of casualties while Houthi-run Saba news agency said 40 were killed in the strike.

"Coalition did not carry out any operations in Hodeidah today (Thursday)," the coalition spokesman, Colonel Turki al Malki, told Alarabiya television. "The Houthi militia is behind the killing of civilians in Hodeidah on Thursday," he said.

"The coalition follows a strict and transparent approach based on the international law. We pursue any allegations and if there is any responsibility we will hold it transparently," he added.

Strikes have picked up around the city since the Saudis last week accused the Iran-aligned Houthis of attacking two oil tankers operated by one of the kingdom's companies in the waters of the Red Sea.

Griffiths told the UN Security Council that he was "still trying" to negotiate a deal to avoid a full-blown battle for Hodeidah, which is a key entry point for humanitarian aid.

Resolving the crisis over Hodeidah would have to be part of a "comprehensive political settlement" between the rebels and the government, he said, suggesting that the talks would take place despite fighting on the ground.

UN-brokered political talks on Yemen broke down in 2016 amid demands for a rebel withdrawal from key cities and power-sharing with the Saudi-backed government.

Since 2015, Saudi Arabia has been leading a military campaign to restore the internationally recognized government to power and push back the Houthis, who still hold the capital Sanaa.

The war has left nearly 10,000 people dead and unleashed what the United Nations describes as the world's worst humanitarian crisis.

Hodeidah could be a flashpoint

The envoy expressed concern that "Hodeidah could be a flashpoint" that could derail the push for talks in September and urged the council to support de-escalation in the port city and "keep the Red Sea out of the conflict."

Appointed last year to lead UN peace efforts in Yemen, Griffiths said there had been a progression towards talks on a possible deal with the Huthis to turn over control of the port to the United Nations, "but the gap is not closed."

US Ambassador Nikki Haley voiced strong support for the UN effort to bring both sides to the table in Geneva, telling Griffiths that the parties must "understand that they need to work with you."

The United States, along with France and Britain, have supported the Saudi coalition in its military campaign in Yemen, but has expressed concern over the heavy toll on civilians.

"Civilians are at risk, infrastructure is at risk, and we as the international community have to demand that the two parties come together and understand the seriousness of this," said Haley.

She added that air strikes that almost crippled the water supply in Hodeidah "are starting to show a disregard for the people on the ground in a time when they are already suffering so much."

UN aid official John Ging described the humanitarian crisis in Yemen as "shocking, both in scale and severity."

More than 22 million people - 75 percent of the population - are in dire need of aid, including 8.4 million who are on the brink of famine, he said.

Since June 1, violence in Hodeidah has forced more than 340,000 people from their homes across the governorate.