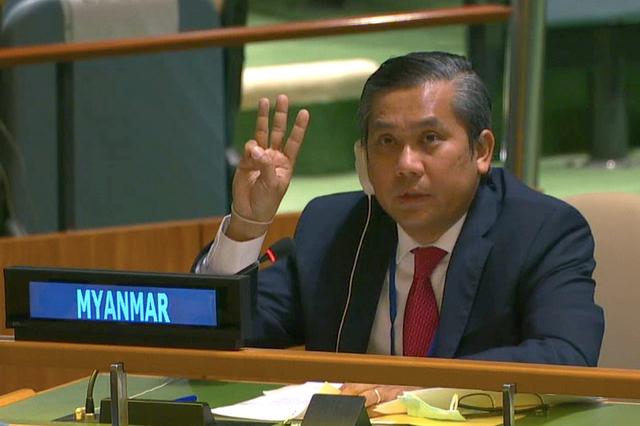 Myanmar's Ambassador to the UN Kyaw Moe Tun giving a three-finger salute in support of the protest movement in his country while speaking to the UN General Assembly in New York, U.S., February 26, 2020. (Photo: CGTN)

UN Secretary-General Antonio Guterres has received two letters that conflict with each other concerning the position of Myanmar's permanent representative to the United Nations, said his spokesman on Tuesday.

"I can confirm that we've received two letters. They're currently under review," said Stephane Dujarric, spokesman for Guterres.

"We've also received a note verbale from the Ministry of Foreign Affairs of Myanmar this (Tuesday) morning, which was addressed to the Secretary-General's Office, informing that the State Administration Council of the Republic of the Union of Myanmar has terminated the duties and responsibilities of Mr. Kyaw Moe Tun as permanent representative of Myanmar and that Mr. U Tin Maung Naing, deputy permanent representative, has been assigned as the charge d'affaires ad interim of the Permanent Mission."

Kyaw Moe Tun, who spoke at a UN General Assembly meeting on Friday against the Myanmar military's detention of the country's political leaders, was fired by the military authorities the next day.