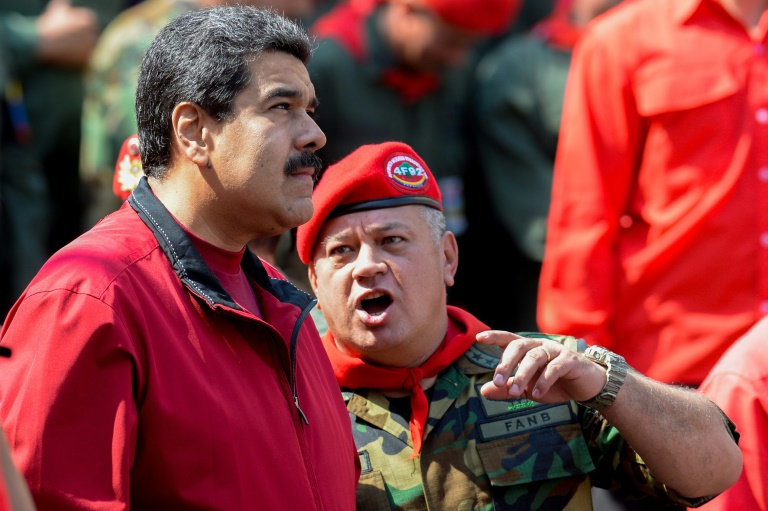 The UN has accused Venezuelan President Nicolas Maduro (L) of systematically failing to probe security officers over the alleged killings of civilians.(Photo: AFP)

The United Nations human rights chief called Friday for an international investigation of atrocities in Venezuela, blasting the government's chronic refusal to probe security officers over the alleged killings of civilians.

"The failure to hold security forces accountable for such serious human rights violations suggests that the rule of law is virtually absent in Venezuela," said Zeid Ra'ad Al Hussein, as his office launched a new report on the crisis-stricken country.

Zeid asked the UN Human Rights Council to set up its highest-level probe -- a Commission of Inquiry -- for Venezuela and said the International Criminal Court may need to get further involved.

The Hague-based ICC in February opened a preliminary investigation into crimes allegedly committed by the security forces during a wave of protests against President Nicolas Maduro.

UN investigators have been denied access to Venezuela. Some of the findings were based on remote monitoring as well as interviews with victims, witnesses, civil society groups and others.

Other evidence includes material compiled by former attorney general Luisa Ortega Diaz, who was sacked by Maduro last August and is living in exile.

The report highlights alleged extra-judicial killings by officers involved in the Operations for the Liberation of the People.

It said those officers, supposedly tasked with fighting crime, may have been responsible for more than 500 killings between July 2015 and March 2017, largely carried out in poor neighbourhoods.

Rights office spokeswoman Ravina Shamdasani told reporters in Geneva that the victims were young men who "tended to fit the profile of suspected criminals," and were "arrested and killed without judicial warrants."

The operations were designed to show Maduro was tough on crime, Shamdashani said.

The report also highlighted the "pervasive" impunity for Maduro and for officers blamed for killing at least 46 people during protests last year.

According to the UN, Ortega Diaz had issued dozens of warrants against officers linked to the deaths, but only one trial has started.

"This impunity must end," Zeid said in a statement.

Under Maduro, Venezuela is going through the worst economic crisis in its history.

Hyperinflation has crippled the country, leading to shortages of food and medicine. Hundreds of thousands of people have fled Venezuela to escape the growing deprivation.

The UN also accused the government of failing to acknowledged the extent of the crisis.

"Families are having to search for food in rubbish bins," Zeid said.

"When a box of hypertension pills costs more than the monthly minimum wage and baby milk formula more than two months' salary, but protesting against such an impossible situation can land you in jail, the extreme injustice of it all is stark."

Upon his re-election on May 20, Maduro promised to work for reconciliation and offered to free political opponents who have not committed serious crimes, in order to "overcome the wounds" of the protests against him, which have left some 200 dead since 2014.