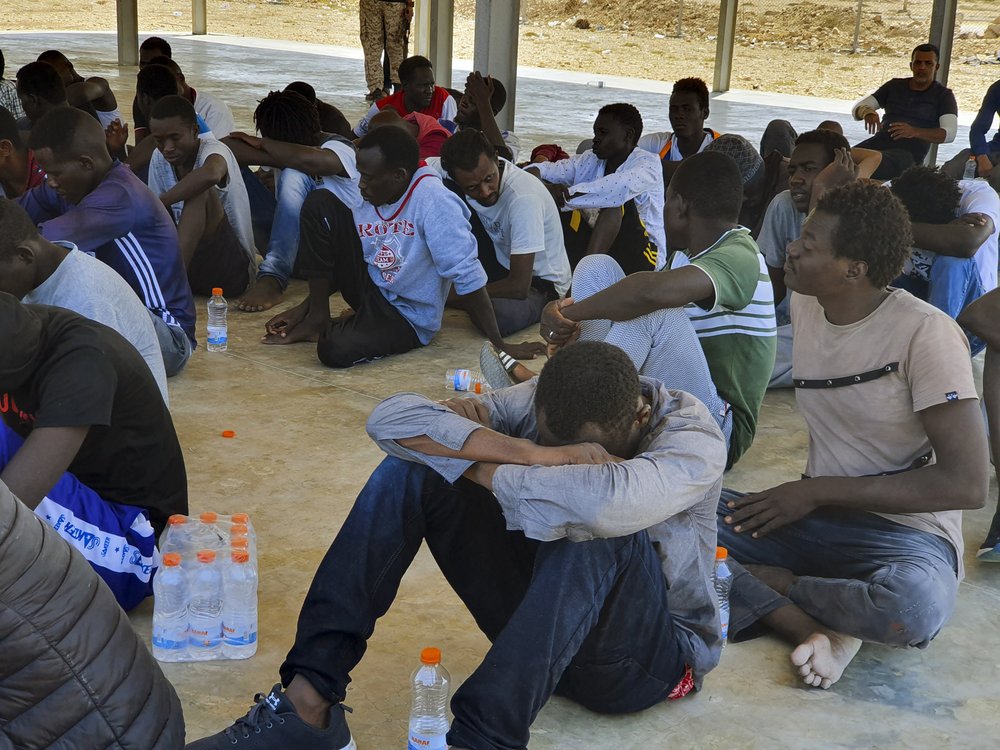 A boat carrying dozens of migrants bound for Europe capsized Tuesday in the Mediterranean Sea off Libya, with at least 40 people missing and presumed drowned, UN officials said, as a support group reported it had gotten a call from someone on the vessel “crying and shouting” that passengers had died already.

At least 65 migrants, mostly from Sudan, were rescued, said Ayoub Gassim, a spokesman for Libya’s coast guard, with a search halted for those still missing. The coast guard gave a lower estimate for those missing and feared drowned, saying it was 15 to 20 people.

Gassim told The Associated Press that five people were confirmed dead, including a woman and a child from Morocco whose bodies were recovered near the western town of Khoms, around 120 kilometers (75 miles) east of Tripoli. The other dead were men from Morocco, Sudan and Somalia.

Tuesday’s shipwreck was the latest maritime disaster involving migrants seeking a better life in Europe. One month ago, up to 150 Europe-bound migrants, including women and children, were missing and feared drowned when two boats carrying about 300 people capsized off Libya. In January, 17 died or were missing off Libya and in May, about 65 drowned when their boat sank off Tunisia.

“If today’s tragic numbers are confirmed, the number of people drowned in the Mediterranean in 2019 will have reached close to 900,” said Charlie Yaxley, a spokesman for the UN refugee agency, who gave the estimate of at least 40 dead or missing, among them women and children, based on eyewitness accounts of the survivors.

The UN’s migration agency said a total of 859 migrants have died in the Mediterranean as of Aug. 22. It said 45,505 people have arrived in Europe by sea so far this year, which represents a 30 percent drop from 2018.

Alarm Phone, an independent support group for people crossing the Mediterranean, said about 100 were aboard the capsized vessel. The group said it received a call from migrants on the boat, who “were in severe distress, crying and shouting, telling us that people had died already.”

Libya’s coast guard says it has intercepted hundreds of migrants at sea so far in August.

The country became a major crossing point for migrants to Europe after the overthrow and death of longtime dictator Moammar Gadhafi in 2011, when the North African nation was thrown into chaos, armed militias proliferated and central authority collapsed.

In recent years, the European Union has partnered with the coast guard and other Libyan forces to try to stop the dangerous sea crossings. Rights groups say those efforts have left migrants at the mercy of brutal armed groups or confined in squalid detention centers that lack adequate food and water.

At least 6,000 migrants from Eritrea, Ethiopia, Somalia, Sudan and other nations are locked in dozens of detention facilities in Libya run by militias accused of torture and other abuses. There are limited supplies for the migrants, who often end up there after arduous journeys at the mercy of abusive traffickers who hold them for ransom from their families.

More than 3,000 migrants are in danger because the detention centers in and around Tripoli are close to fighting between forces loyal to Field Marshal Khalifa Hifter and an array of militias loosely aligned with a UN-recognized government since April.

At least 44 people were killed in July by an airstrike on a detention center for migrants near the Libyan capital in an attack that the UN human rights chief said could amount to a war crime.

The government blamed the airstrike on Hifter’s forces, which denied responsibility and accused government-linked militias of storing weapons at the facility.

In Europe, meanwhile, two humanitarian groups that have been flying search-and-rescue missions for migrants out of the Italian island of Lampedusa say their planes have been grounded by Italy’s civil aviation authority.

The German group Sea-Watch and the French nongovernmental organization Pilotes Volontaires confirmed their flights have been grounded. Sea-Watch spokesman Ruben Neugebauer called the grounding political, saying that the group is in compliance with Italian and national norms.

Neugebauer said it is important to have the planes in the air because they document human rights violations by ships that do not respond to rescue calls.

Italy’s civil aviation authority, ENAC, confirmed the groundings, saying the aircraft are approved for recreational and not professional use. Malta closed its airspace to the effort last year.

This one targeted a vessel operated by the German group Lifeline that picked up about 100 people Monday in a rubber lifeboat some 50 kilometers (31 miles) off the Libyan coast. Lifeline has urged the German government to help identify a safe harbor.

While Italy and Malta are the closest European ports, Italy has enacted a policy to exclude humanitarian rescue ships from bringing migrants to its ports. Malta generally has accepted migrants rescued in its area of responsibility. The positions have led to numerous standoffs.