WORLD UN says no exodus of civilians from Sirte, envoy concerned about Libyans

UN says no exodus of civilians from Sirte, envoy concerned about Libyans

UNITED NATIONS, Jan. 7 (Xinhua) - One day after the east-based Libyan National Army (LNA) said it had taken Sirte, a UN spokesman said on Tuesday there has been no exodus of civilians from the coastal city of the North African country. 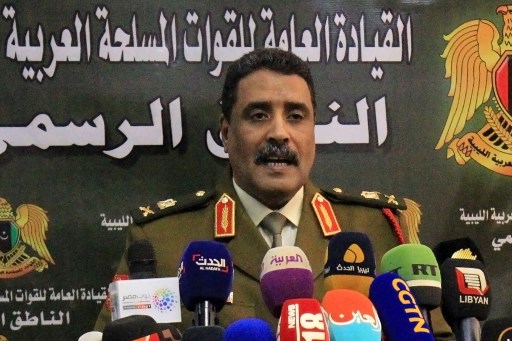 Ahmad al-Mesmari, spokesman for Haftar's forces, addresses the media in the eastern Libyan city of Benghazi on January 6, 2020. (Photo: AFP)

"In terms of the situation in Sirte our humanitarian colleagues tell us that as of this (Tuesday) morning no major civilian displacement has been recorded following the announcement by the LNA of its territorial advancement in Sirte," said Stephane Dujarric, spokesman for UN Secretary-General Antonio Guterres.

"We are continuing to monitor developments in the area and continue to remind all parties of their obligations under international humanitarian law to protect civilians and civilian infrastructure," Dujarric said. "Aid workers continue to provide assistance to people impacted by the conflict in and around Tripoli as well as other parts of the country."

The LNA on Tuesday announced in the eastern city of Benghazi that it had taken the coastal city of Sirte, some 450 km east of the capital Tripoli, while the UN-recognized Government of National Accord (GNA) said it had withdrawn its forces from the city to save civilians.

Ghassan Salame, the special representative of the secretary-general and head of the UN Support Mission in Libya (UNSMIL), was at UN headquarters in New York on Monday briefing the Security Council on the latest conflict in Libya.

After the closed door Monday meeting with members of the Security Council, Salame spoke with reporters, saying the situation in Libya is "particularly difficult at this time."

He said some fighting in some parts of Sirte held by the LNA was still on, but he was mainly concerned about for the people of Libya.

The envoy complained of foreign countries' troops and mercenaries entering Libya to either support the LNA or the GNA.

Salame described the situation as "bleak" and said he asked the Security Council to act to keep out foreign interference, because too many weapons, mercenaries and countries are already involved in Libya.

He reiterated there is "no military solution" to the conflict affecting so many civilians, many who have had to flee their homes.

"I care about the Libyans and they are asking, where is the international community," Salame said, clenching his fists and raising his voice.

The council's inability to reach consensus on a stance on the Libya conflict has led him to say that "enough is enough... The Libyans have suffered enough."