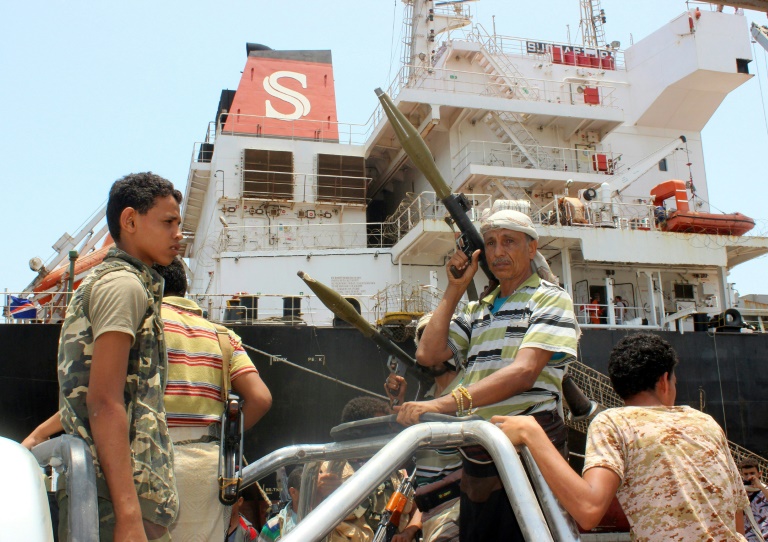 The United Nations said Sunday that a Yemeni rebel withdrawal from key Red Sea ports was proceeding as planned, after the government accused insurgents of faking the pullout.

The port of Hodeida serves as a lifeline for millions in the impoverished Arabian Peninsula country, which has been pushed to the brink of famine by more than four years of devastating war.

Yemen's government had accused rebels Sunday of a "policy of deception" after they announced the withdrawal in a long-delayed move agreed under a ceasefire deal last year.

But the UN, which said it had teams monitoring the Hodeida, Saleef and Ras Issa ports, later reported that the pullout had gone "in accordance with established plans".

It said the coastguard had taken over responsibility for security at the three sites after a Huthi rebel withdrawal that had begun Saturday.

Government officials had earlier cast doubts over the handover process, saying it was unclear who was taking control of the ports.

The pullback is part of a truce agreement for Hodeida brokered by the UN between Yemen's Saudi-backed government and the Iran-aligned Huthi rebels in December in Sweden.

The city's port is the conduit for the vast majority of aid and imports into Yemen.

But experts said it was too soon to say if the withdrawal represented genuine progress.

"The (Sweden) agreement is very difficult to execute because the lines are blurry and each side interprets it the way it wants to," said Yemen expert Farea al-Muslimi, a visiting fellow at the London-based Chatham House think tank.

"Overall, the next two weeks will show if this is a handover or a yet another hangover," he told AFP.

Yemen's information minister accused the rebels of faking the pullout.

"What the Huthi militia did is a repeated theatrical play of handing over control of the port to its own forces (in different uniforms)," Moammer al-Eryani tweeted on Sunday.

"This shows its continued manipulation and evasion to implement the Sweden agreement... by adopting a policy of deception."

Sources close to the Huthis said the ports were handed over to coastguard personnel who were in charge before the rebels took over Hodeida almost five years ago.

Faltering UN peace efforts interspersed by outbreaks of fighting left hundreds dead before UN chief Antonio Guterres in December announced a series of breakthroughs in Yemen peace talks, including a ceasefire for Hodeida.

According to Adam Baron, a Yemen expert at the European Council on Foreign Relations think tank, the Huthi withdrawal represents a "potential breakthrough".

"That being said, it remains to be seen how significant it can truly be," he told AFP.

"Trust between both parties borders on non-existent, something that continues to hamper any efforts toward deconfliction.

"Even an implementation of the deal only signals progress on one part of the deal and one aspect of the conflict. It's key to remember that Yemen is not Hodeida and even amidst the relative calming there, the conflict continues to burn."

The UN Security Council is due to hear a briefing on Hodeida on Wednesday -- a day after the rebel withdrawal is expected to be completed.

Last year's deal was hailed as a breakthrough that offered the best chance so far of ending the war in Yemen, where a coalition led by Saudi Arabia and the United Arab Emirates is fighting on the government's side.

But although the violence has largely stopped in Hodeida, there have been intermittent clashes and the promised redeployment of the warring parties away from the front lines has failed to materialise.

A peace deal for the rest of the country also remains elusive.

"The agreement in Sweden only stopped the fighting in Hodeida, the challenge is to turn it into an all-inclusive national agreement," said Muslimi.

The military coalition led by Riyadh intervened in March 2015 when President Abedrabbo Mansour Hadi fled into exile in Saudi Arabia after the rebels captured swathes of the country.

Yemen's conflict has killed tens of thousands of people, many of them civilians, relief agencies say.

The fighting has triggered what the UN describes as the world's worst humanitarian crisis, with 24.1 million -- more than two-thirds of the population -- in need of aid.