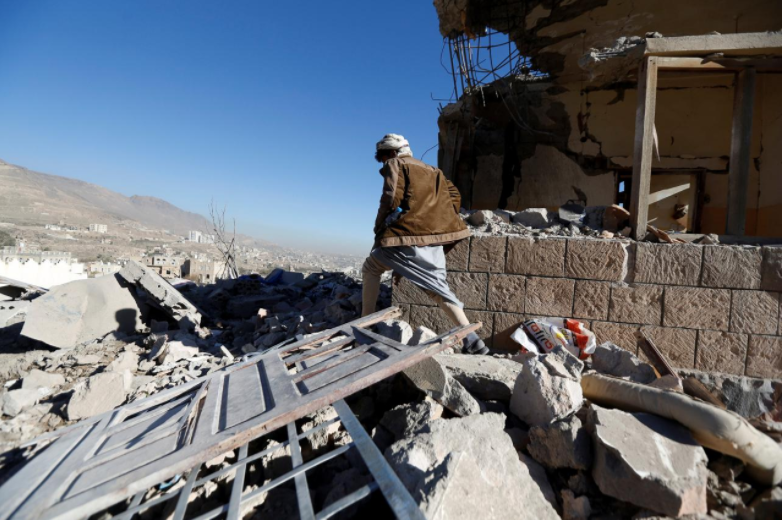 A man walks past a destroyed house at the site of air strikes in Sanaa, Yemen December 26, 2017. Photo: REUTERS/Khaled Abdullah

A Saudi-led coalition fighting in Yemen has killed 109 civilians in air strikes in the past 10 days, including 54 at a crowded market and 14 members of one family in a farm, the top UN official in the country said on Thursday.

UN resident coordinator Jamie McGoldrick called the fighting futile and absurd, an unusually direct criticism of the war in which the coalition, backed by the United States, Britain and others, is fighting the Iran-allied Houthi armed movement.

Eight of the dead and six of the injured were children, according to the reports.

On the same day an air strike on a farm in Attohayta district of Hodeidah governorate killed 14, and air strikes elsewhere killed a further 41 civilians and injured 43 over the past 10 days.

“These incidents prove the complete disregard for human life that all parties, including the Saudi-led Coalition, continue to show in this absurd war that has only resulted in the destruction of the country and the incommensurate suffering of its people, who are being punished as part of a futile military campaign by both sides,” McGoldrick said.

Under international law, the warring sides must spare civilians and civilian infrastructure, he added.

The United Nations has no up-to-date estimate of the death toll in Yemen, having said in August 2016 that according to medical centers at least 10,000 people had been killed.

The United Nations says Yemen is the world’s worst humanitarian crisis, with about 8 million people on the brink of famine, a cholera epidemic that has infected 1 million people, and economic collapse in what was already one of the Arab world’s poorest countries.