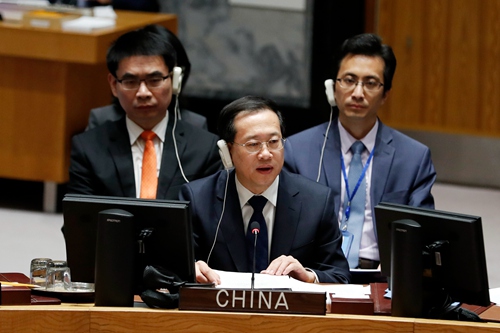 New York (People’s Daily) - Ambassador Ma Zhaoxu, permanent representative of China to the United Nations and also the Security Council’s president this month, delivered a press statement on Saturday in New York, expressing "the strongest condemnation" of the terrorist attack against the Consulate-General of the People’s Republic of China in Karachi, Pakistan, on Friday, which resulted in the deaths of two Pakistan police officers, and two civilians.

The statement said that the members of the Security Council condemned in the strongest terms the heinous and cowardly attack.

The members of the Security Council also condemned in the strongest terms the heinous and cowardly terrorist attack at a market in Khyber Pakhtunkhwa Province of Pakistan on the same day, which resulted in at least 35 people killed and dozens of people injured.

The members of the Security Council appreciated the swift response of the Pakistani authorities, expressed their deepest sympathy and condolences to the families of the victims and to the government of Pakistan and they wished a speedy and full recovery to those who were injured.

The members of the Security Council stressed the fundamental principle of the inviolability of diplomatic and consular premises, and the obligations on host governments, including under the 1961 Vienna Convention on Diplomatic Relations and the 1963 Vienna Convention on Consular Relations, to take all appropriate steps to protect diplomatic and consular premises against any intrusion or damage and to prevent any disturbance of the peace of these missions or impairment of their dignity and any attack on diplomatic premises, agents and consular officers.

The members of the Security Council reaffirmed that terrorism in all its forms and manifestations constitutes one of the most serious threats to international peace and security.

The members of the Security Council underlined the need to hold perpetrators, organizers, financiers and sponsors of these reprehensible acts of terrorism accountable and bring them to justice, and urged all States, in accordance with their obligations under international law and relevant Security Council resolutions, to cooperate actively with the Government of Pakistan and all other relevant authorities in this regard.

The members of the Security Council reiterated that any acts of terrorism are criminal and unjustifiable, regardless of their motivation, wherever, whenever and by whomsoever committed. They reaffirmed the need for all states to combat terrorism by all means, in accordance with the Charter of the United Nations and other obligations under international law, including international human rights law, international refugee law and international humanitarian law, threats to international peace and security caused by terrorist acts.

In a statement yesterday delivered by his spokesperson, Secretary-General Antonio Guterres extended his deep condolences to the families of the victims and wished a speedy recovery to those injured.

“He hopes those responsible for the attacks will be swiftly brought to justice,” read the statement.