UNITED NATIONS, Nov. 19 (Xinhua) - A draft resolution on Yemen was circulated among all Security Council members on Monday for their consideration, diplomats said. 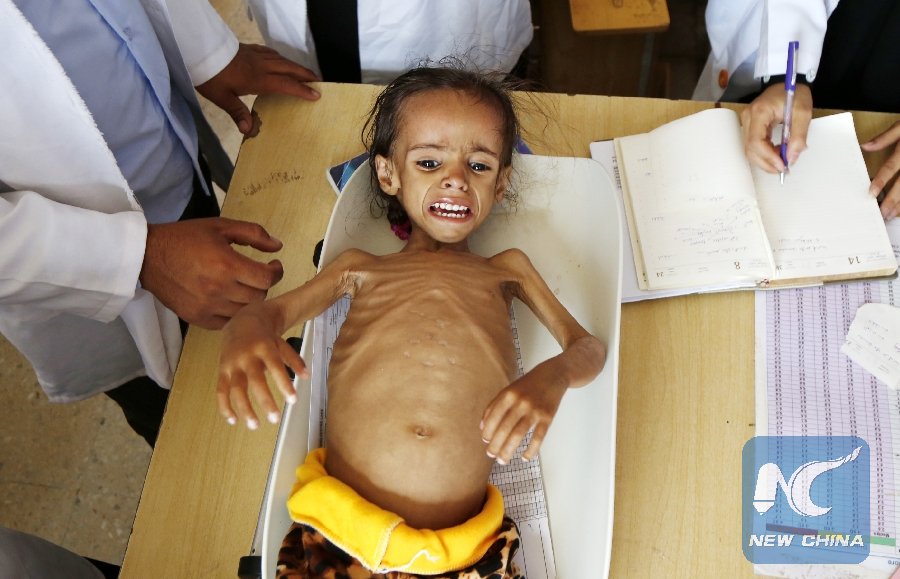 A malnourished 4-year girl is weighed while she receives treatment at a malnutrition department in a hospital in Sanaa, Yemen, on Sept. 2, 2018. Millions of people in the war-torn Yemen are unable to secure one meal a day. (File photo: Xinhua)

Dutch ambassador to the United Nations Karel van Oosterom said he hoped the draft resolution, which calls for a cease-fire around the key Red Sea port of Hudaydah, humanitarian access and injection of foreign currency into the economy, could be adopted as soon as possible "because that's what the Yemeni people need."

But Kuwaiti ambassador Mansour Al-Otaibi said his delegation has reservations about the British-drafted text.

Asked by reporters whether the council would be able to vote on the draft resolution within this week, Otaibi said, "I doubt it."

He said the draft was first circulated among the five permanent members of the Security Council before it was made available to all the members on Monday.

Negotiations on the draft will start on Tuesday, he said.

"Yemen faces the largest food security emergency in the world, and the worsening humanitarian outlook requires urgent action to reduce the likelihood of significant loss of life," he told the Security Council.

The UN secretary-general's special envoy for Yemen, Martin Griffiths, told the Security Council on Friday that he intended to reconvene the country's warring parties in Sweden, saying he had received firm assurance from the leadership of the parties to attend the meeting.

Yemen has been in civil war in the past three years, pitting Houthi rebels and forces loyal to the government of Abdrabbuh Mansur Hadi. Saudi Arabia leads an Arab military coalition to support the Hadi government.