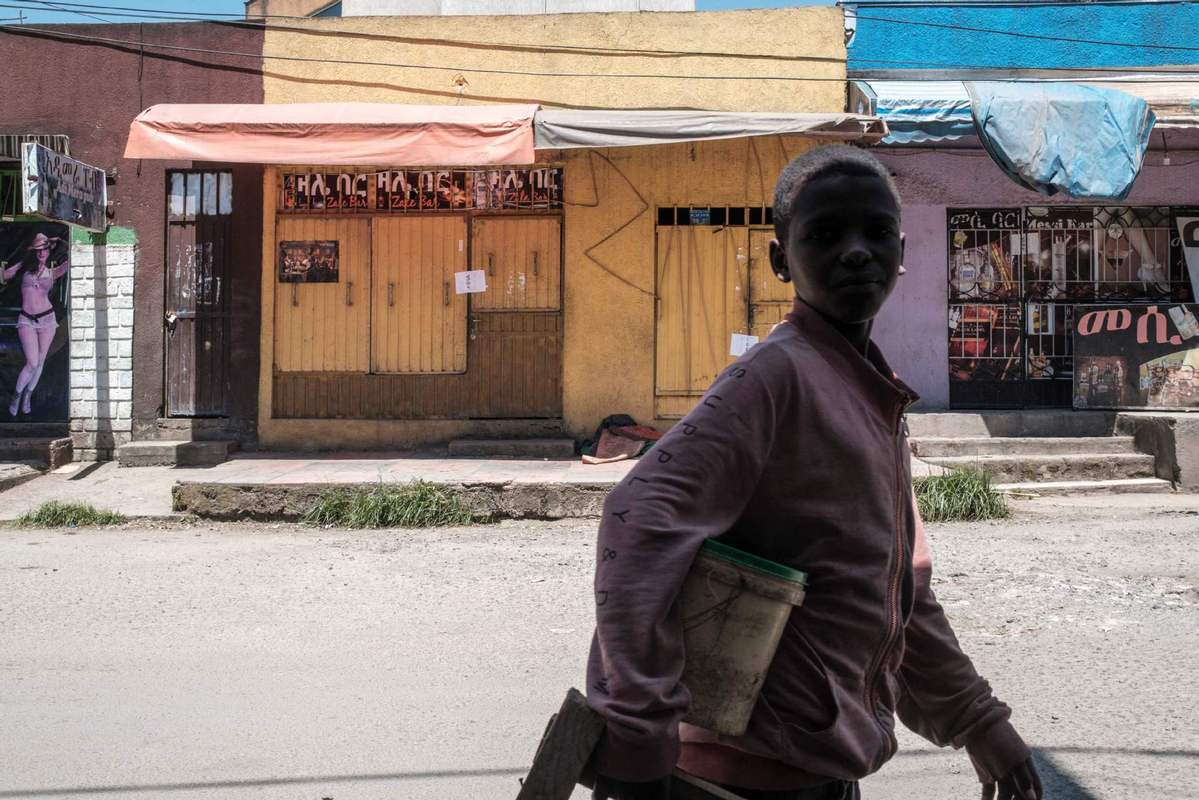 A young street vendor walks in front of closed shops in the city of Addis Ababa, Ethiopia, on Oct 21, 2021. [Photo/Agencies]

The United Nations is appealing to the Ethiopian government for the immediate release of an unprecedented number of detained staffers and contract aid truckers, a UN spokesman said on Thursday.

"We continue to actively engage with the government to try to undo this situation," said Stephane Dujarric, the chief spokesman for UN Secretary-General Antonio Guterres. "We want to see our colleagues released as quickly as possible. We want to see those contractors who have been hired by the United Nations and international nongovernmental organizations (NGOs) also freed as quickly as possible."

As of Thursday, at least nine UN staff members and more than 70 truck drivers remained in detention, he said.

Asked at a regular press briefing about the number of detainees in comparison with previous detentions of UN staffers, anywhere in the world, Dujarric replied, "In my recent memory it is unprecedented in terms of numbers that we are seeing."

The United Nations and NGOs hired the truck drivers to deliver humanitarian aid into the northernmost Tigray region of Ethiopia, the site of a year-long rebellion that has since spilled into the neighboring areas of Afar and Amhara.

Earlier in the week, published reports said the government was rounding up people identified as Tigrayans.

"From our standpoint, they are Ethiopians, our colleagues, they are staff members, regardless of what ethnicity might be listed on their national identity cards and they need to be released," said Dujarric.

"Our humanitarian colleagues say that people in Amhara need shelter, food, and water, as well as medicines and protection, as fighting in Amhara has led to many people being newly displaced from Dessie, Kombolcha, Baati, Kamissie and other areas in Amhara," Dujarric said. "Tens of thousands of internally displaced people have reportedly registered in the city of Debre Berhan, with many people taking shelter in two schools there."

Thousands of people are also reportedly displaced from Chifra and Ada'ar in Afar, he said. The majority of these people are women and children.

The spokesman said security concerns hamper the delivery of humanitarian aid. Electricity and telecommunications were cut in Dessie and Kombolcha in Amhara on Oct 30. Some 915,000 people have received food assistance, and nearly 160,000 have received shelter and other items since August.

However, he said that no UN-organized humanitarian supplies could take the Semera-Abala-Mekelle route into Tigray since Oct 18. In Semera, Afar region, 364 trucks are being held.

Dujarric said fuel and cash shortages significantly affect the ability of the United Nations and its partners to transport supplies, including food. The lack of essential medical equipment, supplies, and vaccines across the whole of Tigray is also seriously impacting the availability of health care.

Throughout the country, humanitarian operations face a funding gap of $1.3 billion, including $350 million for the response in Tigray alone, he said.