UN urges French probe into use of force against 'yellow vests'

The UN rights chief on Wednesday called for a "full investigation" into the possible use of excessive force by French police during the often violent "yellow vest" protests. 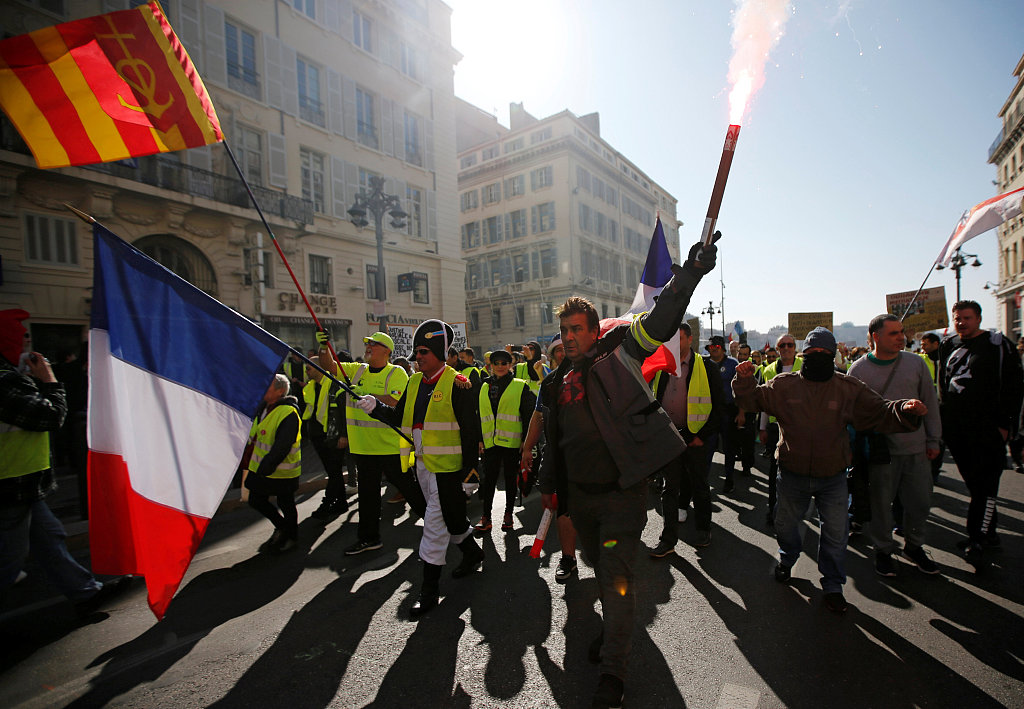 "The 'Gilets Jaunes' have been protesting what they see as exclusion from economic rights and participation in public affairs," Michelle Bachelet said in her annual address to the UN Human Rights Council in Geneva.

"We encourage the government to continue dialogue -- including follow-up to the national discussions which are currently under way -- and urge the full investigation of all reported cases of excessive use of force," the former Chilean president said.

The weekly "yellow vest" protests began in mid-November over a planned hike in fuel taxes.

But they quickly grew into a broader anti-government revolt by people in rural and small-town France who have been angered by the policies of French President Emmanuel Macron.

Bachelet's comments won a frosty reception in Paris where Prime Minister Edouard Philippe said France "did not need (the UN) to shed light" on the violence which has marred the yellow vest protests.

"In France, we have the rule of law," he told BFMTV, suggesting it was necessary "to tell the High Commissioner about all the incidents of extreme violence," notably those against the security forces and public property.

French government spokesman Benjamin Griveaux also expressed surprise at Bachelet's criticism of France, noting that the IGPN, which investigates police abuses, had launched 162 investigations into the conduct of officers during the protests.

The UN rights chief said people worldwide had taken to the streets to protest inequalities and deteriorating economic and social conditions, saying their demands "call for respectful dialogue and genuine reform".

Eleven people have died during the protests, all but one victims of traffic-related accidents.

The security forces' use of rubber bullets has also been a major source of controversy although French campaigners recently lost a legal bid to force police to stop using them.

On Thursday, the French Senate will discuss a draft law banning the use of LBDs, so-called defence ball launchers which fire 40-millimetre rubber projectiles that have been blamed for a number of serious injuries.

But it has little chance of being adopted.

The government has defended the use of rubber bullets and stun grenades as necessary following violence from some demonstrators who have repeatedly attacked the security forces.

Last week, some protesters in the southern town of Montpellier threw bags filled with faeces and acid at police.

Two weeks ago, the Council of Europe rights group urged France to halt the use of defence ball launchers during operations aimed at maintaining public order.

On January 30, the French interior ministry said the IGPN had opened 111 inquiries into 9,228 incidents in which LBDs were used against demonstrators.

According to the "Disarm Them" collective, 20 people have sustained serious injuries to the eyes since the protests began.