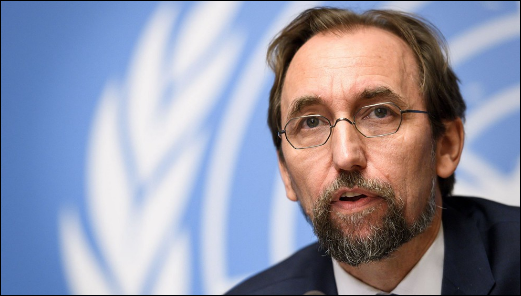 ‍The UN High Commissioner for Human Rights Zeid Ra'ad Al Hussein on Thursday appealed to the Japanese government to bring justice to the victims of sex slavery during World War II "quickly" as they are aging fast.

At a press conference at the UN headquarters in New York, Zeid said the victims of wartime sex slavery in the Republic of Korea (ROK), the Democratic People's Republic of Korea (DPRK), China and other countries are aging fast, and that "they need to feel if there is going to be any sense of justice to their suffering."

"This needs to be done quickly. That would be my appeal to the government of Japan," he said.

He also expressed the hope that Japan could be more open about the possibility to revise the terms of a 2015 agreement struck with ROK dealing with the issue, which has been rejected by the latter's victims and current government.

Under the deal between Tokyo and Seoul, then led by former ROK president Park Geun-hye, the two sides agreed the issue of "comfort women," a euphemism used by Japan, had significantly strained their ties and should be "finally and irreversibly" resolved.

However, Zeid said Park's team did not consult principal sex slavery victims when negotiating the accord with Japan.

Current ROK President Moon Jae-in has said the agreement is not capable of resolving the issue because a secret deal has been found out between the two governments by a review of its negotiation procedure.

"I believe at the moment things are at a standstill," said Zeid, suggesting that Japan be "more open about the possibility to look at the terms of the agreement" and bring them "into line with the views of the victims."

Some 400,000 women across Asia were forced to become sex slaves for the Japanese army during World War II.