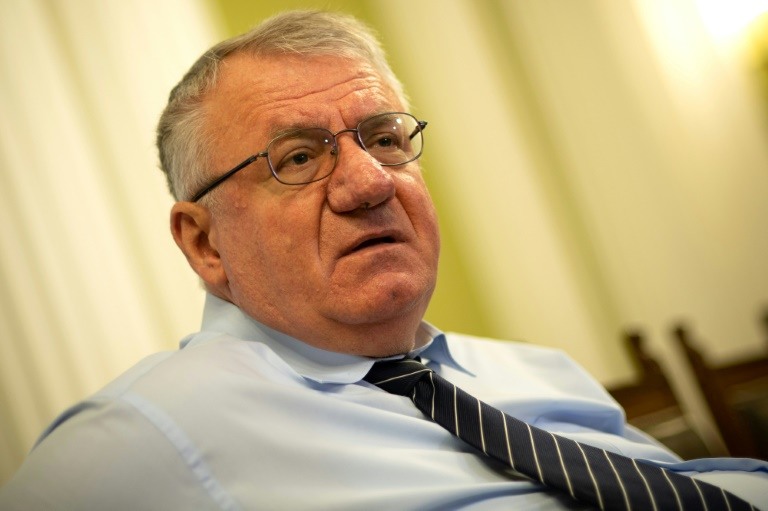 UN judges Wednesday found radical Serb Vojislav Seselj guilty on appeal of crimes against humanity, but the firebrand politician will remain a free man because of time already served behind bars.

Seselj told AFP after the ruling that he was "proud" of the crimes he was convicted of -- including inciting persecution -- and was willing to do the same again.

Presiding judge Theodor Meron sentenced the firebrand politician to 10 years behind bars, at a hearing in The Hague.

"The appeals chamber reverses Seselj's acquittals for instigating persecution, deportation and other inhumane acts as crimes against humanity," the judge said.

The judges however said that in line with the court's rules, "Seselj's sentence has been served" after he spent about 12 years in jail while facing trial at the former Yugoslav war crimes court.

Seselj snubbed the hearing and was not present when the verdict was read by judges at the Mechanism for International Criminal Tribunals (MICT) in The Hague.

He had been acquitted in March 2016 of six war crimes and three crimes against humanity charges after a trial lasting more than eight years at the International Criminal Tribunal for the former Yugoslavia (ICTY).

A three-judge panel led by French judge Jean-Claude Antonetti said in 2016 that prosecutors had "failed to prove beyond all reasonable doubt" or provide sufficient evidence that Seselj was responsible for the crimes he had been charged with.

The verdict had been heavily criticised by law experts and historians who said it had rewritten the history of the Balkans conflicts.

The five appeals judges agreed Wednesday, partially overturning the original trial's findings, finding him guilty of three counts of crimes against humanity, but upholding his acquittals on the six counts of war crimes.

Either the initial court had "ignored a substantial portion of highly relevant evidence and its own findings, or it erred in fact," Meron said.

"The appeals chamber finds that no reasonable trier of fact could have concluded that there was no widespread or systematic attack against the non-Serbian population in Croatia and in Bosnia-Herzegovina."

During his marathon trial, prosecutors alleged Seselj was behind the murders of scores of Croat, Muslim and other non-Serbs between 1991 and 1993 in the conflicts that tore Yugoslavia apart, after the fall of communism.

The prosecution had sought a 28-year-sentence for the man they referred to as the "chief propagandist of the Greater Serbia". They said he had warned that "rivers of blood" would flow in Bosnia if his vision for a Greater Serbia was opposed.

Seselj denied the allegations and in particular making two speeches highlighted by prosecutors. In the original trial, the judges found his speeches were not incitement to violence, but that he was merely "participating in the war effort by galvanising the Serb forces."

The appeals judges sharply condemned however what they called Seselj's "inflammatory words" which they said "substantially contributed" to the persecution and deportations of non-Serbs, including Croats and Bosnian Muslims.

In one speech in May 1992 in the village of Hrtkovci, in Serbia, he had declared "there was no room for Croats" adding "we will drive them to the border of the Serbian territory and they can walk from there," Meron said.

His speech "incited violence that denigrated and violated the right to security" of Croats in the village, Meron stressed.

The judgement neatly avoids a showdown between the court and Serbia, by finding that the opposition politician has already served his time, and does not face being sent back behind bars.

Seselj, who surrendered himself to the ICTY in 2003, told AFP earlier this month that it was all "lies" that he had made inflammatory speeches, adding that he did not regret his role in the conflict.

"We will never give up the idea of a Greater Serbia," Seselj insisted. He said his extreme right-wing Serbian Radical Party exists "to unite within the same state all the territories where the Serb people live".